An interesting aspect of the various cat breeds is the behavior of cats within each breed. Is there a variation in behavior amongst the cat breeds and in general terms what are the differences?

Cat behavior is dictated by genetic inheritance and environmental experiences - nature and nurture. in my opinion, there will be differences in behavior between individual cats that is greater than the differences between the cat breeds. There are, however, noticeable differences in behavior between some cat breeds. This difference is said to originate in genetic factors. In relation to discovered breeds these genetic factors are probably related to the original genotype of the cat breed rather than the genes introduced through selective breeding.

Who is best placed to observe the behavior of the various breeds of cat? Veterinarians and cat show judges. The latter will see a wide range of cat breeds under at least slightly stressful conditions for the cat. 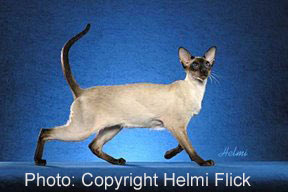 Cat show judges will probably confirm that the Siamese cat (see photo) and its associated cat breeds (the Balinese and Oriental Shorthair) is the most demanding of attention, expressed through vocalizations and the most outgoing with strangers. The Siamese cat is probably the best communicator with humans because of the breed's willingness to communicate and the variations in his or her meow. The meow is the standard vocalization in normal communication between human and cat. The meow is rarely used in cat to cat conversations.

The Persian is also considered to be at the opposite end of the spectrum to the Siamese. This breed is more passive.

In a survey of veterinarians by Dr. Fogle (the author of The Encyclopedia Of The Cat), they were asked to rank six breeds (a small sample as there are over 100) in terms of levels of activity, destructiveness and tolerance to handling. The findings supported the show judges. They agreed that the Siamese was a particularly vocal and active breed of cat.

I am not sure what the word "destructive" means in this context. Perhaps it means that the Siamese became more agitated and moved around more causing disruption.

The Siamese and Oriental Shorthair are considered smarter than average cat breeds. There is no doubt that intelligence and a desire to make demands on a human companion go together.