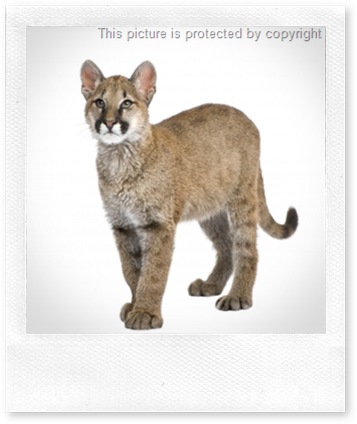 Although the mountain lion (cougar, puma - this cat has many names) was distributed over all of North America at one time, it is now confined to the west, extending to Texas, Colorado and Nebraska. The area is gradually diminishing as human population, and therefore activity, in the USA grows year on year. The cougar generally steers clear of humans and was eradicated from Connecticut in the late 1800s.

But there was one male cougar who trekked towards humans although he didn't realize it. And it cost him his life.

Cougars like all wildcats leave the natal area and seek their own home territory when adult. Females often stay close to their mother's territory while males can travel long distances to find somewhere suitable. This male cougar traveled 1,500 miles to find his home range. The usual distance might be about 100 miles.

His journey is said to have started in the Black Hills of South Dakota . This is on the far east of the current known area of distribution of the mountain lion in the United States.

From South Dakota, this 10 stone male mountain lion traveled via Canada to almost the east coast of the United States where it was hit by a 4x4 vehicle while crossing the road. Many mountain lions are run over by traffic, particularly the Florida cougar. Many are also shot. Various sightings of this individual cat confirm that the journey took at least 18 months.

An interesting aspect of this story is that the people at Sessions Woods Wildlife Management Area in Burlington who carried out a postmortem on the cat said that it had to have been a wildcat and not domesticated or captive because it had not been declawed! Proof that it is commonplace to declaw cougars when they are domesticated. It is not uncommon to domesticate large wildcats in the USA. That in itself is questionable but to declaw the cat is horrible, self indulgent and cruel.

The question people now ask is, "are the experts right?". Is this a rare case of a lone wildcat striking out to find its home range and going too far or is there a colony of mountain lions in the eastern states of the USA?