- April 12, 2009
I am sure that the Alexa algorithm has been changed at the same time as the website was updated. There was a decision to upgrade everything, what you see and what you get. Some sites have benefited massively and some have fallen. This site has fallen. That is despite building a lot of content over the last 4 months or so.

The Google Analytic figures are more or less stable for this blogger site subdomain and the main site. There has been a small fall off in page view but the Analytics figure show a 0.03% drop over months so this is infinitesimal. Also my web hosting company shows very little change. But Alexa on one day showed that this site had a traffic ranking of 1.4million when for months and months it was at the 115K mark. That represents a drop by a factor of more than 10! Alexa is also rating my page views much lower and I say it is inaccurate. And I know the site has to be below 100,000 for accuracy but why? Surely that is a problem that Alexa needs to address. Also this site is ranked 118K close to 100k. But it is falling....! Traffic rank for Sunday was severely depressed: 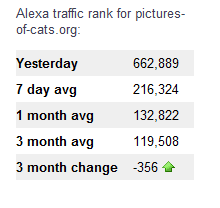 Showing the downward trend.
This is not seasonal but sudden and at about the time the Alexa website changed
On the basis of stable traffic figures but a falling Alexa ranking (it is now around the 180k mark, a big drop) I conclude that the mathematical formula used by Alexa has been changed. And it seems that the change is in favor of tech sites, blogging and social networking sites as the buzz seems to be to be that these are more modern and useful to companies like Alexa.

This may be a reaction to the credit crunch, the financial crisis. It is seen as a symptom of the "old way", the bad way and we need to move forward and out of that world. We need new people to manage the banks and basically business. The Alexa people probably reflected on all this and decided that the future was young modern sites and the algorithm had to reflect that. That is my guess, of course. I am probably off the mark a bit or a lot but it feels that the changes are based on that kind of mentality. 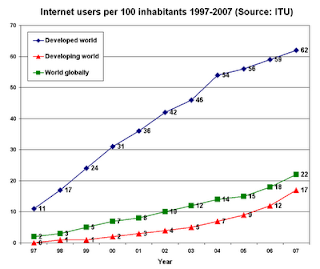 Chart published under published under
Wikimedia® creative commons license license = Attribution-ShareAlike License
Author Kozuch
I also think it pays to stand back and look at the big picture to find answers to what the intentions of Alexa are (note: this is just me speculating). Alexa are owned by Amazon and Amazon are in the internet business. The more people in the world who can use the internet the more business they will do. Globally including developed and the developing world 22% of the people use the internet (see chart above). There is plenty of room for expansion. To achieve that Amazon need to encourage and facilitate internet use. This can be achieved by encouraging tech sites to flourish to educate people and social sites to spread the word. To achieve that, I argue, Alexa have changed the algorithm to rank more highly these sorts of sites and businesses including new social networking sites. Lets not forget a site can be ranked anywhere by Alexa. They control the rules and it is not just based on how many visitors the site gets. Google have become the world's most powerful business, I believe, on the back of encouraging internet use by providing free software and products. It is the classic "preselling" technique so talked about on internet marketing sites.

It seems most of the cat sites are affected negatively. i-love-cats is affected positively, however, why? Well it has been around a long time with lots of inbound links and it does have a forum. That might be a factor. I don't think anyone has actually figured out the underlying changes. But I think what I have said above are relevant.

Update: Well, there is no doubt that Alexa have made changes to their algorithm as there has been too much disturbance to the traffic rankings. The dust has been kicked up. I say this having checked a number of sites. Some tech site have improved their rankings by large numbers. However, the day after I reported the above the traffic ranking has, at least for one day, returned to normal for my site so right now all seems to be kinda OK.

One factor in benefiting would seem to be if your site has a lot of inbound links, a decent page rank basically. It seems this is more of a factor in their algorithm. For example, Blog Buster has improved dramatically while enviroman's Blogger tips and tricks has dropped because he basically screwed up. His site was hosted by Blogger but he wanted to go fancy and upmarket and have a "proper" URL so he bought a domain name and redirected his domain from Blogger to the other hosting company. The URL looks nicer but as his URL changed he lost his inbound links and his pagerank and now his Alexa ranking too all for a nice URL. Never do this! The URL is unimportant. The content is important. Also it would have made sense to talk about SEO on Blogger sites if you yourself use a Blogger site.

Further update 14-4-09: The downward trend stopped yesterday but that is probably due to the massive effort I have put in recently!

16-4-09: There have been a lot more sites mentioning this since I first made the post. I guess that confirms it. It's history already! In hindsight I don't think the changes to the algorithm have been big (you couldn't do that as it would undermine the whole thing) but there have been changes and when they were made there were initial glitches and now it is more settled.

27-4-09: Things have returned to normal. Traffic is up. But why? For me, there was strong evidence that the Alexa algorithm had changed because there was too much change in traffic rankings at the time this post was first made but maybe they changed it back in a panic when they saw the drastic change it had on traffic rankings. I can only speculate.

2-5-09: Yes, another update. Traffic is up for this site and the Alexa ranking is currently getting better. So, although changes certainly took place it is not clear what happened subsequently. I mentioned the website, i-love-cats.com that improved dramatically in Alexa rankings after the change. That site has no gone back to "normal". It almost seems that they made changes and then changed back but it is not clear.