- November 22, 2011
This is a great jaguar photograph. It was taken by an automatic camera that is sensitive to movement: a motion activated camera trap. Correct placement is important obviously. In this instance it seems that it was placed on a well used trail in a forest in Peru. The jaguar lives in a variety of tropical and subtropical habitats.

I have worked on the image quite a lot. It has been sharpened a bit and the color made more saturated. It has also been cropped to a squarish format and text added to give the image a poster feel. I also retouched out two cables that were straddling across the undergrowth behind the jaguar. These adjustments are allowed under the creative commons license, for which I thank Smithsonian Wild. 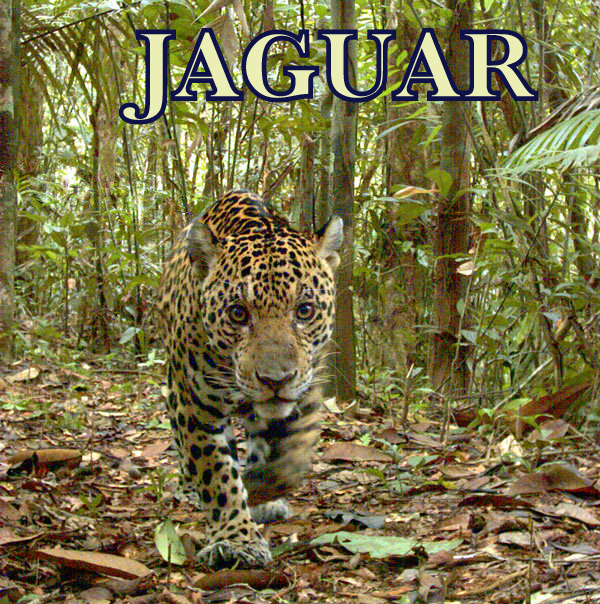 This a really nice jaguar picture now. I think it works well. I hope you do too. I love the intensity in the eyes and the purposeful walk. Note: I have donated $35 to the Smithsonian Institute for the use of this photo.

The jaguar (Panthera onca) lives in Central and South America. It is the largest in all of the Americas. It is the third largest wildcat on the planet. The jaguar is a very burly cat. It is closely related to and similar in appearance to the leopard but it is heavier than the leopard.

The jaguar has a large head and short powerful limbs. The jaguar spots are rosettes; sometimes with a black spot in the center. These rosettes become solid spots on the limbs and undersides.

The jaguar varies in size over its range. Some are twice the size of others. This is due to prey availability. The average weight of this cat in Central America is 56 kilograms (123 lbs - pounds).  Male jaguars in the Pantanal region of Brazil average 102 kilograms however (224 lbs).