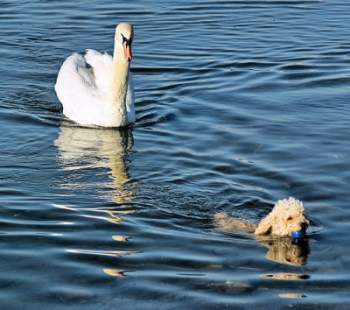 People looking for a dog chasing cat picture will in fact see the above, a swan, hissing like a cat, chasing a dog. Confused? Actually this is a serious post but I like the picture.

Sometimes cat breeders let other cat breeders keep their stud cats (I guess for a fee). Sometimes breeders have other animals like dogs. This means the breeder is who is going to "loan" the cat to the new breeder with dogs has to decide if it it safe to do so.

Stud cats are sometimes (often?) kept in outside cages for practical reasons. Or indoors permanently. Will the new breeder be as diligent as the other in looking after the cat? Will the cat get out and be attacked by dogs? These are considerations for a breeder who will be saying goodbye for a time to a much loved cat. Although cat breeding is a commercial enterprise breeders form close relationships with their cats.

I read a sad story of a cat breeder's huskies killing a Bengal cat that had been loaned for breeding purposes. The cat was able to get out and the dogs chased and killed the cat - extremely distressing for both the breeders. This was more than a dog chasing cat scenario.

Whether a dog chases a cat depends largely on the upbringing of the dog; whether they are well socialized with cats and other pets and humans. Clearly good early socialization will be necessary if you are considering mixing cats with dogs. Some dogs are great with cats.

However, it would seem that some dog breeds are more likely to attack a cat than others because of the long term breeding program associated with the breed of dog.

For example the Siberian Husky has been described as a "keen and efficient hunter and killer". This dog breed apparently cannot be trusted with other animals (non canine animals) including cats unless the dog has been brought up with a particular cat and even then they have, it seems, been known to attack the cat for no reason. Conclusion (if this is correct): don't mix cats with Siberian Huskies or perhaps any type of Husky as you're likely to get a dog chasing cat situation with a very sad end.

On the other hand some dogs are considered safe around cats (provided they are properly socialized) and these are for example Great Danes, Cavalier King Charles, Shih Tzu. I am sure there are many others.

The Great Dane is not considered dangerous despite her/his size and is friendly towards other animals including cats (as a breed trait). The Cavalier King Charles can even act like a cat sometimes, cleaning paws in the same way for example and finding high places to perch on.

The Shih Tzu requires socialization to become totally trusting with other animals but is not dangerous it seems. Conclusion:- a cat breeder or anyone else for that matter should think long and hard before letting another person who keeps dogs, look after her cats. And remember in the USA lots of cats are declawed so she can't defend herself. Plus they are often kept indoors permanently which means they may try and escape at the new home. The dog chasing cat scene can be amusing for some but deadly for others.