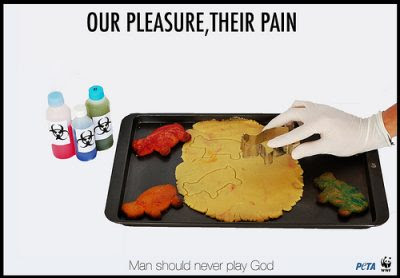 Photo copyright imranchaudhry published under a creative commons license fully complied with. This is an image of an image it seems to me and the original might not be the copyright of imranchaudhry - please advise.

Animal Clones and particularly pet cloning is in the news again. We do like to play around with science don't we and fool ourselves into believing that it is for the good of humankind? I think we need to spend more time and expend more energy on some basic issues like human and animal rights the world over before we play God with pets. We need to get back to some basic and sound thinking on real and pressing matters. Animal clones are being used for medical research but it has now been proposed that animal clones are produced as a replacement for a pet that has died. This post deals with this aspect of the process.

We know that animal cloning is about money, profit. As I have said elsewhere it is hard enough to reconcile cat and dog breeding with ethical and moral behavior, never mind cat and dog cloning. And I am not some rampant animal rights activist. I just like to think of the welfare of animals as opposed to making money out of them.