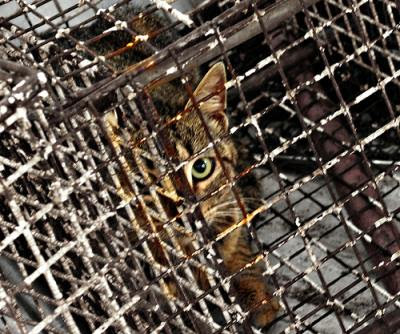 Cat cruelty - this cat is not related to the story below but has suffered an equally sad fate, killed by the authorities in Israel to prevent rabies. There is a feral cat problem in Israel caused by, yes, you guessed it, humans and the only way they figured they can deal with it is to punish and kill the innocent victims of their behavior, the cats. It is time humans took responsibility for their actions. A more proactive approach would be far better but it seems so often we are unable to take preventative actions - it's all reactive and too late. Photo copyright ofer k reproduced under a creative commons license.

Cat Cruelty is in the papers fairly frequently. I have posted on this subject before because it is important that we recognize a weakness and nastiness inside us. Most cat cruelty is due to ill directed anger plus an ignorance about nature and cats in particular. Some people have the most weird and idiotic thoughts about cats. Here is an example.

A man who seems to be reasonably well educated (so this isn't to do with pure ignorance) and living in Shoreham, West Sussex, killed a neighbor's cat because he thought the cat was smirking at him. He felt the cat was bullying him. Gosh, he really must have very low self esteem.

The cat had knocked over a vase in his landlady's house and he thought the cat "looked pleased" afterwards. Come on. Some people really need to grow up. Cats simply do not think like that. How can I be sure cats don't think like that? Firstly it is clear that this person is putting human thoughts into a cat's head. To feel pleased about something requires an intellectual intelligence beyond that of a cat. That is not a criticism of a cat as cats are more intelligent in other areas.

It requires self consciousness to think that way and cats as far as I am aware are not conscious of themselves. They act instinctively which is why their behavior is dependent on ours to a large extent (if they are living with us).

This idiotic person punched the cat unconscious and then threw him into a river where he drowned. He is likely to be charged with criminal damage and animal cruelty. In this country we think of cats as the property of people - an ill conceived concept and one which indicates that we see ourselves as superior to cats and can do as we please with them. The law almost encourages cat cruelty. If we thought of cats in a more enlightened way cat cruelty would occur much less often.

It really is time humankind grew up and became less arrogant and more in tune with the world on which we live and the other animals.

Update: This person could and should have been prosecuted (I am not sure if he was) under the Animal Welfare Act 2006. This protects cats and other animals and if convicted of causing unnecessary suffering a person can be punished by imprisoned for a maximum of 51 weeks and be fined a maximum of £20,000. This happened to another man who drowned a cat.