Cats on Your Bed 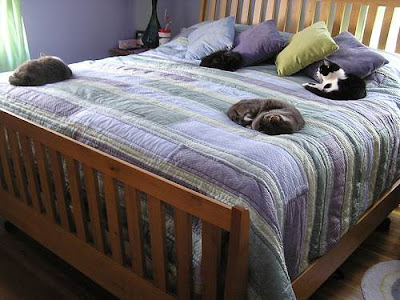 Cats on Your Bed is bad, some people think. Personally, I just don't get this. There may be some good reasons, sometimes for some people to keep a cat of the bed at night but generally, there is no evidence to suggest that this harmful. I have kept cats for many years without the slightest suggestion of transmission of disease from my cat to me (zoonotic diseases are those that are transmittable between animals and humans). I actually have never considered that there is a distinction between animals and humans as humans are simply a more intelligent animal. Humans cannot though be considered to be intelligent in an absolute sense. Look at the mess we make of things! In short we are all animals, just different species.

And as far as I am aware, the great naturalist, Desmond Morris has similar thoughts. That's not the reason that I have mine, though.

Some diseases that a cat can have can be transmitted to us and if she sleeps on your bed it would seem that there is a greater chance of transmission. However, as the Cornell University College of Veterinarian Medicine puts it, you are more likely to catch an ailment from another human than a cat. So, if you stop your cat sleeping on your bed to minimize transmission of disease, you'll have to do the same with your partner if you are to apply fair standards. In fact you should remove your partner first on the sole basis of transmission of disease.

Most zoonotic diseases are harmless to humans. Some people are more vulnerable such as the very old and very young because of immature or weakened immune systems. The most common zoonotic disease is cat scratch disease. A certain bacteria transmitted through the scratch or bite of the cat that breaks the skin. This doesn't mean that all bites and scratches result in this disease - far from it. I have had many scratches (in play) and no trouble. Never had a sign of a disease.

Cats on Your Bed will not increase the possibilities of transmission of this disease, obviously. Unless you play rough with your cat and that is in our hands. Note too that only some cats have cat scratch bacteria to transmit. I don't know the percentage but it is probably very low.

So, this is about risk really. There is a risk of getting something from a cat or dog etc. There is risk in everything we do and my argument is that the risk of catching a disease from a cat is much lower than being hurt from other sources in our daily actions. The logical thing to do is to modify our behavior to minimize injury in those areas where the risk is high before thinking of arguing that Cats on Your Bed is a bad thing.

All that said a sensible and reasonable approach to keeping a cat should be employed. Avoid getting scratched and bitted by sensible handling of your cat (but don't be fearful). For example disease can be transmitted through a cat's faeces. Toxoplasmosis is the classic disease that can be transmitted this way so handling cat litter sensibly and keeping the litter tray clean is important. Of course the cat has to carry the disease in the first place.

Fleas are another problem, a very common problem. I would always be alert to fleas :). Check your cat frequently and comb them out with a flea comb. I wouldn't use sprays or chemicals. But if it's bad the drops that are placed on the back of the cat work well for about one month. But the cat's skin smells different and it affects the cat (in my experience it made my cat more sleepy initially).

Another transmittable disease is ringworm. Cats on Your Bed is good for both human and cat with a bit of care.
By Michael Broad at May 05, 2008