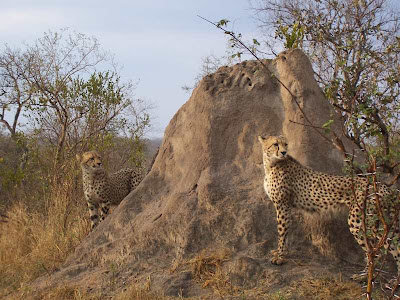 The Cheetah food chain is a short one, on the face of it. But before I mention it we must remind ourselves that the Cheetah is an endangered species. The Cheetah habitat has shrunk severely over many years and in the area where there are the most Cheetahs (Namibia) she is hunted and killed by farmers because she is forced to live on farmland. The situation is terribly dysfunctional.


Food Chains
The term "food chain" indicates a straight line transfer of fuel (biomass) from one animal to another in the form of a chain of events, usually the eating of one animal by another until the top predator is arrived at. Perhaps a more accurate depiction of the events is in the form of a network (food network) as there is in fact more going on that is at first apparent in part because consumers will consume from various sources forming an interconnected network of events.

A food chain starts with a primary producer and usually ends with the top carnivore.

Cheetah Food Chain
The Cheetah hunts and eats small to medium sized mammals such as gazelles, springbok and impala. The Cheetah will also catch and eat young zebra and wildebeest. See what cheetahs eat.

Although the Cheetah is "outranked" by all other large predators in his habitat, he has no predators (equal top of the chain) because of his speed. A Cheetah relies on speed to survive so will avoid injury. Injury in a fight wold result in the Cheetah losing the one advantage he has over all other large predators and so would make survival far more perilous. This is why the Cheetah gives up his kill to scavenging predators that he could possibly see off. It's risk/reward formula. It is more sensible in survival terms to give up the kill and kill again.

Gazelles eat coarse plants and leaves that are easy to digest. Plants and leaves are primary producers. They are able to make their own food from sunlight using the process of photosynthesis.

The Cheetah food chain starts with the primary energy source - sunlight. Here is a rather crude diagram depicting it (free to use): 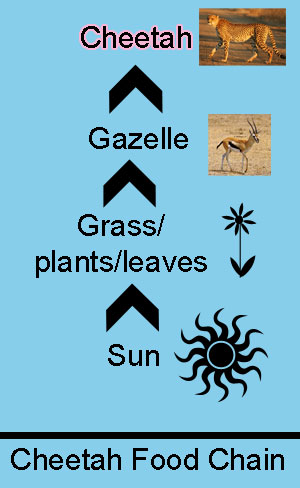