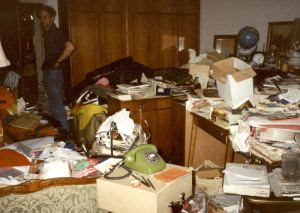 A recent example of hoarding cats has come to light; an extreme example in which the person, a man, was found to have 300 (dead) cats and kittens in three freezers and about 20 live cats in the home. The usual mess, smell and chaos was present too.

We hear lots of stories like this about cats and humans. We pretty well know that the cause of this is due to a mental disorder called OCD (Obsessive Compulsive Disorder). This condition manifests itself in the hoarding of any manner of possessions from living to dead, it really doesn't matter. It is also manifest in actions. I can remember David Beckham saying publicly that he likes things to be tidy to the point of obsession. Tidying up objects so that they are inline or form clean shapes for example creates a sense of order (the objects look orderly). The individual is maintaining order around him in a chaotic world. This creates comfort.

OCD is a reflection of acute anxiety in the individual concerned, in my opinion. I don't know if this is agreed by the physicians or not. As it is treated with anti-anxiety drugs and anti-depressants they probably agree although I expect the experts are not completely sure.

Because hoarding creates a mild comfort zone. People are frightened to throw things away, they might need them, it feels safe to know you have things you might need. The collection of possessions creates a sense of security allieviating the anxiety. The excessive nature of it is a manifestation of an inability to cope and perhaps laziness.

If a person who likes cats has this level of anxiety it translates to cat hoarding. Cat hoarding presents more problems that inanimate object hoarding as they need caring for.

So this person who had 300 cats in three freezers is mentally ill but not profoundly so. He is also I think ill educated and unable to cope and probably (and I am sorry is this is not PC) plain ignorant.

Source: Me
Picture: From Wikipedia Commons. This is object hoarding not cat hoarding but the same principles apply