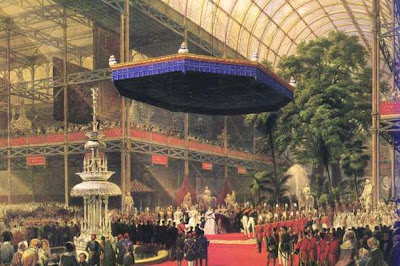 Early UK cat shows were held here. The Crystal Palace Exhibition Hall, London at the opening by Queen Victoria in 1851. This was in Hyde Park in the center of London. The glass and metal hall was moved to Sydenham (further out) in about 1853 and it burned down in 1936 - picture in public domain as copyright has expired

Early UK cat shows, the big ones, were held at Crystal Palace, London (see above). These shows go back to the beginning of the cat fancy (meaning the start of the era where cat lovers got together to show and develop cat breeds).

The cat fancy has changed enormously. When you read the very early reports (late 1800s to early 1900s) of cats shows and see illustrations it is evident that there was little concept of creating and developing cat breeds. Breeds were generally natural cat breeds and the breed was "refined" (as people in the cat world call it).

Here is an interesting extract from the Penny Illustrated from 1871:

Shows are so various as the Crystal Palace that even a cat-show treat scarcely takes one by surprise. This exhibition is interesting; but, having to commence printing so early, we can only devote a few lines to the feline-show this week. Of the 150 entries, some were extremely fine animals. There was a live wild cat of Scotland (Felis catus) (comment: this is obviously the Scottish Wildcat, which has survived in the wild although there is concern about natural hybridization with domestic cats - a survey is being carried out), exhibited by the Duke of Sutherland; two stuffed specimens of the same variety (comment: don't like that, it wouldn't happen at a cat show today), sent by Mr. F. Buckland. The Hon. Mrs. Grey contributed an imported Persian cat of rare pedigree (comment: this would be what is now called the Traditional or Doll Face Persian the only type at that time), besides which there were many Persian cats of several colours; Angora, Aleppo, and other foreign sorts, including one of great rarity from Siam (comment: this must have been a Siamese Cat, now called the Thai by TICA or the Traditional Siamese in the cat fancy today).

Lady Lubbock sent a beautiful long-haired creature in this class (comment: this it seems to be a Balinese cat). There were also several of the tailless Manx cats, and many displaying curiosities of natural development and colour, some weighing as many as 18 lb, and 20 lb., and one tortoiseshell tom. Altogether this is a fine time for our four-legged fellows. We are next promised (comment: I presume that this phrase means that there will be a show next year)