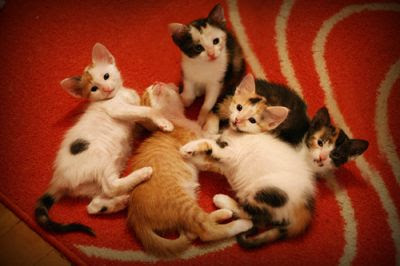 I have decided that the most likely is (a) and make this post on that basis. I have, even though I say it myself, been very careful in preparing some pages on rescue operations in relation to purebred cats generally and rescue operations serving a particular cat breed.

It is very sad that they exist at all. You'd have thought that a purebred cat which would have been carefully bred and "sold" (lets say a change in keeper) for a high price would be cherished by her new carers. This is not always the case. The reason is probably the fault primarily of the breeder. Why?

If the cat becomes ill after adoption then it will be the responsibility of the buyer or seller depending on the contract and implied terms (and common sense). Some illnesses have a certain life span and incubation so it is possible to ascertain where the cat caught the virus or developed the disease.

The point, though, is this. On the basis of practicalities, what ever happens after handover it is likely in practice to be the responsibility of the buyer. And if she or he has not the highest of responsible natures, then under the difficulties of an ill purebred cat the buyer may abandon the cat to a rescue center. The truth is that both are equally involved in the creation and maintenance of a vulnerable and fine fellow creature. Both are ultimately equally responsible and the primary responsibility rests with the breeder as she/he initiates the process. It must be her/his concern to avoid her cats ending up in cat rescue homes.

I sense that the vast majority of breeders are good and diligent people. That by itself is not enough. The wider issues must be born in mind. The cat is of primary concern. The cat's health is paramount. It doesn't seem like it always is, though.

Here is a list of links to pages on this website of cat rescue homes (rescue centers) both in the USA, UK and other countries. Although nearly all the information relates to the major cat fancy countries, the USA and UK. All contain comprehensive lists of cat rescue homes and locations. Often rescue operations look after the cats in their care at volunteers homes who act a foster carers until a long term adopter comes along. One final point. I don't the know the percentage of purebred cats in rescue homes but it is probably a small percentage. However in a better world there should be no cats never mind purebred cats in cat rescue homes.

Cat Rescue Homes to Siamese cats
By Michael Broad at May 19, 2008