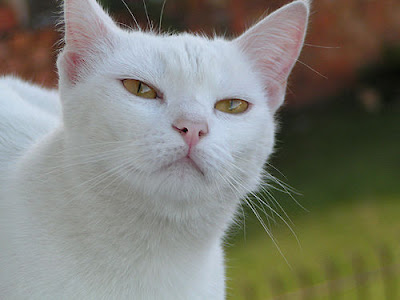 Domestic Cat Character - Superior looking? Yes this cat does look as if he thinks he is superior but this is exclusively a human concept. We shouldn't put ideas into the heads of others including cats. It is humans who think they are superior to others. Photograph copyright fofurasfelinas (the best Flickr cat photographer)

The Domestic Cat Character is misunderstood. I just read a new article about the voting in the presidential elections and the vote goes to Barack Obama for those who like cats (and I guess animals generally). He has a strong record on animal rights apparently. But the Guardian writer Emine Saner says that cats are known to be superior and selfish implying that the majority of people think this. I have never thought of the Domestic Cat Character as having these qualities.

Yet I can understand where this comes from. There is also a fear of cats because although they are small they are natural born hunters and if mishandled can hurt you. I wonder if it is a combination of these factors that encourages some people who are damaged (mentally) to torture and kill cats. We not too infrequently see stories popping up in the papers about people torturing cats. This is a cowardly manifestation of depression and a hatred of the world. The person taking his anger out on a vulnerable creature that he probably dislikes for the wrong reasons.

The idea that cats are selfish and superior must come from their demeanor and actions. They are independent to an extent and they are do not train well. Maybe will think that because we can't train them (i.e. control them as we can with dogs) then they are to be despised. I think in the opposite way. Their dignity and desire to exercise their own rights is to be admired. But independence and being difficult to train (or being difficult to get to do what we want them to do) does not mean that they are selfish and superior. Heavens knows where this author got the idea that cats are superior from. Cats don't and can't think of themselves as superior. We think like that not cats. This is just bad thinking.

There really is a ton of misconconceived ideas about cats and on many other subjects. I hate to say it but there is a ton of ignorance in the world. Education will solve so many problems. When you are ignorant life is harder because it is more difficult to resolve problems and get on. Things are more frightening and what we fear we kill (or hurt or are defensive about). Ignorance is the root of a lot of violence.

Lets all try and understand our fellow creatures including cats. They don't think they are superior; they just survive like you and me. And we are all selfish to a degree. We had a kind of contract with cats when they domesticated themselves. The contract didn't stipulate that your cat has to show altruism towards others and you. The contract was and is that the cat behaves as she is meant to - as a domesticated cat with the wild still inside her. The Domestic Cat Character is in fact beautiful and natural.
Email Post
Labels: Cat behavior human behavior