Building a cat enclosure cannot be that complicated and in any event there are a lot of businesses now who make them for a fairly modest price. I have been banging on about them for months. A cat enclosure must be the best solution to the eternal dilemma of keeping a cat safe in a world that is frankly hostile to cats (well it's also pretty hostile to humans too).

It is appropriate to think of a cat as a child when making arrangements for accommodation. When we think of having a child we should make lots of plans and even buy a new home sometimes to ensure the correct facilities are in place. A cat gives as much pleasure yet very few spend a few hundred pounds or dollars to construct suitable accommodation for a new cat. Anyone with a decent amount of DIY ability could make one for themselves. The truth, though, is that a lot of people are rather careless and selfish when deciding to have children. This mentality carries over to keeping a cat I am afraid. People acquire a cat for themselves or the children and not for the cat. A little more altruism would help massively.

The obstacle for many is having sufficient space in the garden so that the enclosure integrates well and doesn't dominate. But the biggest obstacle must be the aesthetic issues. How do you knit an enclosure into your property without it looking horrible. A lot of people are very concerned about the appearance of their home. I think that that problem can be overcome with a bit of careful planning. Anyway it is a test of commitment. If we are not prepared to build an enclosure we should ask ourselves if we have the right set of circumstances in place to allow us to keep a cat.

At the basic level an enclosure can be built without the need for a professional supplier/installer. You'll need a cat flap through a wall or a window (or a door; but a door is unlikely to be suitable as the cat flap leads directly to the enclosure so there will be nowhere for a human to go - unless you have a door and space beyond that is hardly ever used, which would be ideal).

The actual enclosure could be almost any size and built of pretreated 4x2 wood (max) and chicken wire or some kind of fencing. Its size should be about a minimum of about 7 feet square I think but the manufacturers make them a smaller and bigger (I'd prefer about 15-20 feet). There should be a roof as well. That's it at a basic but effective level. The peace of mind for the cat keeper is substantial. And your cat, if she is used to being imprisoned, will be eternally grateful and she'll probably lose some weight. You can also build some climbing stuff in the enclosure and perches. 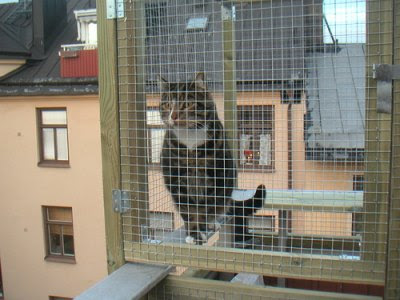 Building a cat enclosure for an apartment is not impossible. Well done this person. Photo copyright Digitala Bönder.

Some middle aged ladies from England built their own enclosure and a gentleman from the Netherlands built his catio. It ain't difficult.

There are businesses supplying either "flat pack" build your own enclosures to custom built ones. One called the Cat's Den (USA) uses a mesh that it heavy duty so that it is largely self supporting - a good idea as it makes it easier to install and it can be dissembled when you move home.

A manufacturer in Maine, USA (Safekitty) makes a simple wooden framed enclosure about 8 feet square, meshed on all sides. The pictures show the enclosure next to buildings and the entrance to the enclosure from a window, which leads to the top of the enclosure with steps down in the enclosure; simple and effective and the chance of injury is lessened (if you currently let your cat out). These enclosures are priced at about $450. Building a cat enclosure need not be expensive.

It may even be cheaper to build a cat enclosure as it may result in less vet's bills (less chance of injury if you let your cat go out). If you live in a flat (apartment) you won't be able to do this as the lease won't allow it. That means for people living in flats on the first floor or higher their cat will have to be an indoor cat with the occasional excursion outside, supervised. I feel that cats shouldn't be in these kind of apartments unless they are very big with plenty of exercise toys/climbs/wheels etc. But see the enclosure above!

I live in an apartment on the ground floor. I let my cat wander out but she asks me to go with her and never goes far so she is completely safe. She'll go on her own sometimes but no further than about 20 feet from the cat flap. If she was less defensive and more adventurous I wouldn't be here in an apartment. Building a cat enclosure is the best solution to modern life with a cat.