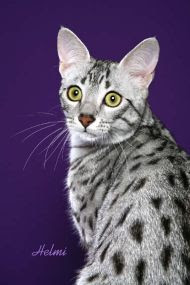 This cat breed has a dual existence, however. While in the West, particularly, the United States, this cat is a valuable and glamorous show cat, pampered and preened, in Egypt, the country of the breeds origin, this cat is an ostracized feral cat.

The difference between the two is that the show cat is naturally more refined through careful breeding while the feral cat is, as expected, a rougher version but noticeably still an Egyptian Mau. You can see an interesting comparison on this page: Egyptian Mau Pictures. 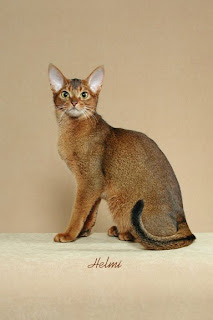 Another cat that is associated with Egypt or Egyptian cat breed, at least the geographical area of Egypt is the Abyssinian cat. The Aby, as the cat is fondly known in the cat fancy, has a statuesque appearance that resembles the ancient Egyptian bronze statues at the time the cat was worshipped (see Egyptian Cat Art). We don't know what kind of cat the sculptures used as models. They are probably an idealized representation of a cat but the Aby's appearance fits very well.

Then there are wild cats in Egypt. Of the six possible wildcats that inhabit the Egytian landscape there is the Sand cat, the Cheetah and the Caracal. The Cheetah is probably extinct in Egypt. The Sand cat and Caracal are elusive. Finally how about a bit of Egyptian Cat Art?