The Jaguarundi Curl is a rare breed of domestic cat and a hybrid cat named after a wildcat whose habitat is in South America; that sounds a bit complicated.

So, I need to remind myself what a Jaguarundi wildcat looks like then I can compare it with the domestic Jaguarundi Curl.

Here is a picture: 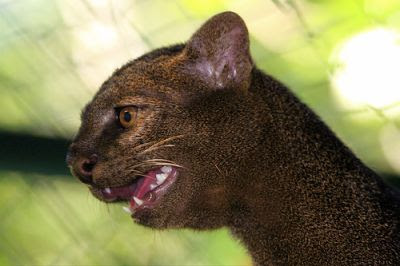 Jaguarundi wildcat - photo by alumroot published under a Attribution-NonCommercial-NoDerivs creative commons License (Flickr). Click to see a large format version of this picture. The ticked coat is very apparent.

Here is another picture showing the whole body and the legs. Why show the legs? Well, the Jaguarundi Curl is a dwarf cat breed and has therefore short legs. This is meant to reflect the short legs of the Jaguarundi wildcat. But I confess, I don't think that the wildcat has particularly short legs. The tail though is long. This is not uncommon in wildcats particularly good tree climbers. The classic long tailed wildcat that excels at climbing is the endangered Clouded Leopard. 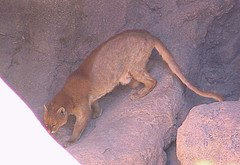 Now lets look at the domestic Jaguarundi Curl. This is a cross between the Highland Lynx and a Munchkin or other dwarf cat breed. The Munchkin is the best known of the dwarf cats and the foundation dwarf cat breed in the creation of the other dwarf cat all of which are referred to with links to lots more on this page: Dwarf Cats and Miniature Cats. Dwarf cats, of course, have short legs. This is the connection with the short legged wildcat.

Although the Highland Lynx has a shortish tail this has been eliminated apparently in the development of the this cat breed to reflect the long tail of the wildcat. So, this cat has curled ears inherited from the Highland Lynx. The best known curled eared cat is the American Curl.

The preferred coat type of the Jaguarundi Curl is ticked. The best known ticked coat is on the Abyssinian. But the Jaguarundi wildcat has a heavily ticked coat. Ticked coats are very common on wildcats. It is a form of tabby coat and provides good camouflage. See cat coats tabby.

In conclusion this cat is a muscular, curled eared, short legged, longish bodied cat with a tabby ticked coat, which is sometimes a spotted tabby. I can't show you a picture because there aren't any except there is one useable picture on the Rare and Exotic Feline Registry website and I don't have their permission to publish it here.

Update 8th Jan 2010: I have permission. Here is a picture of Sasha: 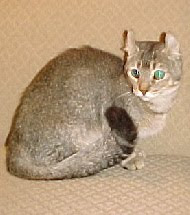 And here is Low Girl:

From Jaguarundi cat to Home page
By Michael Broad at November 03, 2008