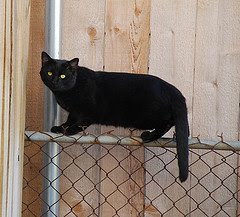 It's that time of year again when black cats better hide. Halloween harks back to an ancient Celtic festival. There is a tenuous connection between black cats and Halloween. The original festival was a celebration at the end of the harvest. The Gaels believed that on 31st October the dead crossed the barrier of death and could affect the lives of the living. They did things to protect themselves. This seems to have been the start of the black magic/horror movie tradition of Halloween.

But where did black cats come in? Black cats were persecuted in the Middle Ages as were people who were considered witches. Cats lived with so called witches and were therefore tainted. Witches, death, magic, cats you can see how black cats and Halloween became connected. There was a lot of superstition about in the Middle Ages. There still is unfortunately. Because the black cat still suffers at the hands of idiot people.

Cat rescue centers historically do not release black cats to people at this time of year for fear of abuse being perpetrated upon them by idiotic and abusive people. That wise policy has been changed by one organization in Canada, however, the Windsor-Essex County Humane Society. They have one of the largest animal shelters in South Western Ontario.

Because of the increased numbers of cats being brought to the sanctuary their policy was changed. The number of cats brought in up to October was the same as for the entire previous year. And of the 5,300 cats dropped in 4,000 have been euthanized. That is a staggering 75%. They do a great job, obviously, but the reality is that they are forced to do a lot of killing. When will the killing stop?

Euthanasia is not killing in the conventional sense, it is killing gently and painlessly or that in any case is meant to be how it is done. Not all euthanasia is painless however.

No kill cat shelter
Are these actually no kill? This post is deliberately provocative.

Euthanize a cat
A morbid and ugly subject but considering it is done over 2 million times in the United States every year it needs to be discussed. How is it done and is it painless?

Black cats
Some more on black cats and superstition plus some great Helmi photographs.


Black cats and Halloween - Photo by JustUptown of a black feral cat. Watch out and hide. Published under a Attribution-NonCommercial-NoDerivs creative commons License