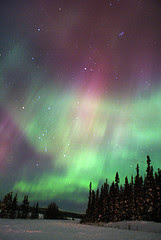 Yukon is a territory of Canada, there are three in total. It is next to Alaska, north west. It looks remote up there (look at this fine photo by Studiolit). I'd bet there is masses of space and a low human population. Plenty of wildlife and hunting.

This is probably why the Yukon cat and animal laws designed to protect cats (my area of interest) and other animals are relatively lax. In Canada there is federal criminal law but it is overlayed with the laws of the provinces and territories. But federal law is supreme. There shouldn't be a clash between the two.

In Yukon there is talk and petitions (I believe) to change the animal protection laws, to tighten them and make the punishment stronger and the enforcement easier (extra rights to the police for example to search and enter). One area that seems to be lacking in Yukon cat and animal laws is the obligation to provide adequate care to animals in a person's charge. This is covered by UK law under section 9 of the Animal Welfare Act 2006. This kind of legislation helps to create an environment in which people's views on animal rights are gently altered, which leads to better treatment of cats and animals. Is it possible to change a society's views and behavior through the application of criminal law? - I think yes.

In fact there would seem to be a ground swell of feeling that the laws protecting animals be strengthened generally across Canada. In a direct comparison with the UK cat and animal protection legislation, Yukon cat and animal laws are substantially lighter certainly. For example, the sentence on conviction in the UK for causing unnecessary suffering is a fine of no more than £20,000 ($39,000 Canada Dollars at Oct 2008) and/or imprisonment no longer than 51 weeks. In Yukon the crime is causing "distress" and the fine is $500 Canada Dollars and/or a maximum of 6 months imprisonment. There will also be the hidden factor of lack of enforcement. Weak laws encourage a sloppy approach to enforcement.

This is something that is not apparent on paper but on the ground even if the legislation is strong and efficient, if the police force is demotivated or lack the will to enforce the laws they become useless. I'd expect some police officers in Canada to be lets say a little right of center in their thinking. This may lead them to like firearms and hunting which in turn may mean some police officers lack the sensitivity towards animals that is required to be motivated to protect them. This is certainly the case in the UK. I have no faith whatsoever in the UK police. They used to be respected; not anymore.

I am all in favor of strong animal protection laws, obviously. Cruelty to animals is known to be a precursor to cruelty to fellow humans. The crime of cruelty to cats and animals should be taken very seriously indeed. Not just for our sake but (for me) the cats and other animals.

Yukon cat and animal laws - Photo: The Aurora at Lake Scwatka, Whitehorse, Yukon, Canada. Photo by by Studiolit and published under a Attribution-NonCommercial-NoDerivs creative commons License