Bengal tiger is a man eater 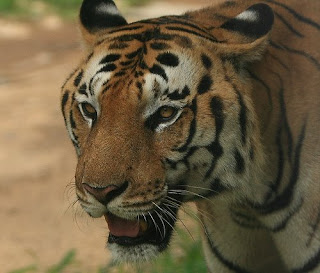 Bengal tiger - photo by The Eternity

The Bengal tiger is a man eater but not by choice. The Times newspaper reports a significant increase in the number of attacks by Bengal tigers on people living in the Sundarbans region of Bangladesh/India (the region straddles the countries) this year. There have been 2o people killed so far this year while 6 were killed for the whole of last year.

The reason is that Bangladesh is an overcrowded country and the area called the Sundarbans, a marshy area on the Ganges delta of some 3,700 square miles, is shrinking. Bangladesh is the size of England with more than twice the population and England. It is about the 4th most densely populated country in the world and certainly the most densely populated country in the world with significant wildlife including large animals.

Add to the already high density of the population, a shrinking landscape in the Ganges delta due to rising sea levels, silting up and floods and you force people and tiger together. The tiger has already unnaturally relocated to the delta because of lack of territory elsewhere. The tiger has adapted to living amongst a lot of water and learnt to fish and swim more than usual but reduction in space and prey means the tiger is forced to attack humans especially if the tiger is ill or finding it harder to cope than normal.

Tigers will naturally avoid humans for obvious reasons. But desperation forces a different strategy. The Bengal tiger is a man eater sometimes by force of necessity no more. Sometimes the Bangladesh people succeed in capturing and killing a tiger that encroaches into a village. If two are killed it represents 1% of the tiger population of Banglasdesh. Just 10 killed is 5% of the total in the country.

There are about 440 Bengal tigers living the Sundarbans of which an estimated 200-250 are in Bangladesh. Although it is hard to estimate accurateyly. In an estimate of tigers in India recently the numbers were found to be lower than previously thought.

They are all endangered as we know under the IUCN Red List of Threatened Species™ (see IUCN Red List for cats). The World Wildlife Fund estimates that there are 2,000 Bengal tigers in the wild from an estimated 40,000 in India alone at 1900.

The bottom line is the Bangladesh population rises relentlessly and the landscape shrinks. This is no place for a wild animal that needs a large amount of space. An individual's range can be 50 to 1000 km2.

Until recently the tiger never came into villages. Now the Bengal tiger is a man eater coming into villages. This will leave them more vulnerable to attack by humans. I am afraid the IUCN Red List listing is rapidly becoming out of date. The next status will be Critically Endangered (CR).

Read lots more about Bengal tiger facts and its endangerment.

Bengal tiger is a man eater to Home Page