November 26, 2008
Ken and Helmi Flick's cats are great and they all very definitely have their own characters. They have 4 cats and one stray cat (Buttermilk) who does not live with Ken and Helmi but who they feed.

Here are the cats. The pictures are mine (I guess you can tell!) except, of course the one of me with Buttermilk. The photos by me were taken spontaneously, mainly in my room in Ken and Helm's home. First we have Quin. He is a large Maine Coon. Well, he might not be that large by Maine Coon standards but he is large, long limbed and quite rangy in conformation compared to the average moggie. His hair flows over his slender body. His face is strong, broad and somehow tender looking. Like his brother, Zak, he can look you straight in the eye and hold that look. That is unusual in a cat but usual for a Maine Coon. 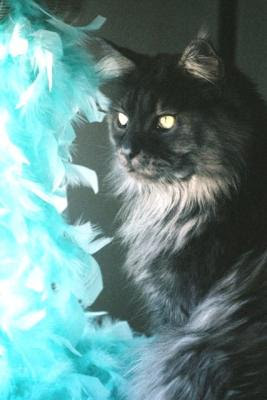 Maine Coon cat- Quin a Black Smoke MC - He has this wonderfully piercing gaze. He is sitting at the window. He has a swirling, glamorous, black smoke coat.

Maine Coons are fairly quiet cats. Judging by Quin and Zak they rarely actually open their mouth to meow but prefer to trill with the mouth closed. The trill is very distinctive and definitely a Maine Coon voice.

Here is a picture of his brother Zak: 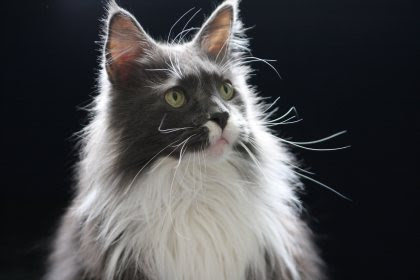 Maine Coon cat - Zak is a Blue and White Bicolor MC. Helmi says that he is the alpha cat in the group. He is a sweet boy. As can been seen he has long hair and he is lean; there is no fat on him. I love the long slightly disheveled coat and whiskers. In this picture he is about to jump up. When he stands on his back legs he is tall, much taller than the average cat. The picture is copyright Michael Broad and it links to a jumbo sized version on another page plus some more about ZAK. 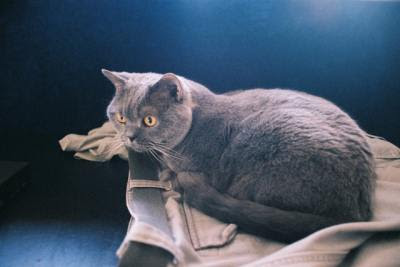 British Shorthair cat - Sky a Blue BS - great open face and a very cute cat. She has just come into my room as I write this......She is now sitting by the window sill and now she is curled up on my trousers....

One defining difference between the British Shorthair and the Maine Coon is the voice. Sky has a very quiet, almost silent voice. It is very sweet indeed. She does her own thing like all cats but is very loving. Helmi chose the name "Sky" very wisely. The sound of the name is apparently easily recognized by a cat and the word sky, evoking the color blue, makes it a very apt name.

And last but not least, we have Nox. He has the most plush, silky black coat and a quiet voice like Sky. British Shorthair cats are known for the plush coats. Here he is: 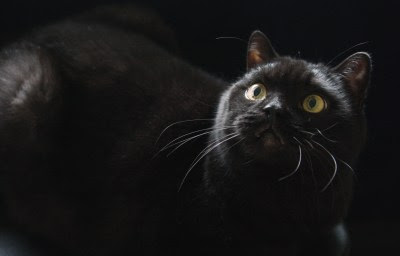 British Shorthair cat - Nox - the boy with the super plush coat - it's great to touch. You could stroke him all day and he'd let you, I think.

And I almost forgot, here is the outdoor stray cat, Buttermilk, that Helmi and Ken feed and give some love to. 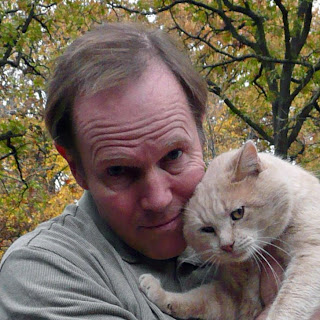 Here's Buttermilk. Oh, the person on the left is me. He's saying OK, OK, that's enough. He has that jowly look of an unneutered boy cat and he is all muscle.

From Ken and Helmi Flick's cats to Home Page