One the eve of Thanksgiving, for a cat lover it is apt to ask, "What have Cats, Pilgrims and Thanksgiving got in common?" Well, in 1620, the Pilgrims or English Separatists sailed from Southampton, England in the now famous ship, the Mayflower, on their journey to Plymouth, North America and it is pretty well common knowledge that cats were stowed on board as mousers. And, traditionally, the first thanksgiving is meant to have occurred at the site of Plymouth Plantation in 1621. 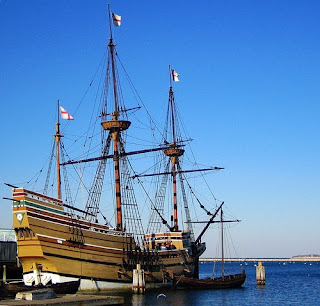 A modern replica of the Mayflower - photo by Lady-bug under creative commons license.

In the 16th century cats were useful on ships in helping to protect limited food supplies from rodents. The culture of having a "ships cat" was and still is widespread. There is a sad news story, in fact, of a young person who threw the ships cat on HMS Belfast into the Thames this year. HMS Belfast (a tourist attraction now) is moored on the Thames, London, England. It is thought the cat drowned.

OK, we almost know for sure that cats came over on the Mayflower in 1620. The Mayflower was a privately commissioned ship and returned to England 6 months after arriving at Cape Cod. The journey took 66 days. It was a hard journey and the spread of disease was a constant threat.

At the time of this epic and famous journey there was no cat fancy (an organized group of people interested in cats). Nearly all cats in England at that time would have been the classic moggie or domestic shorthair cat. These cats are still the kind of cat that most people in England keep as pets. Only a small percentage of people keep purebred cats and the percentage is probably smaller in England than in the United States. 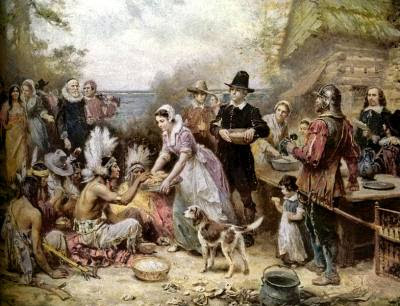 This, to me, begs the question whether there were any domestic cats in North America at the time the Pilgrims arrived. It would seem reasonable to expect that moggies did exist in North America in the 1600s but there is no record as far as I know of this. Apparently the first written record of the presence of cats in north America date from 1634 (src: Carolyn Travers, research manager at www.plimoth.org in Plymouth, Mass), 14 years after the arrival of the Pilgrims.

In which case the ancestors of the British domestic cats brought over by the Pilgrims could now be the ones that can be seen at, for example, a Cat Fanciers Association (CFA) cat show as "Household Pets". These are non purebred domestic cats that most people keep, which can be shown at cat shows. 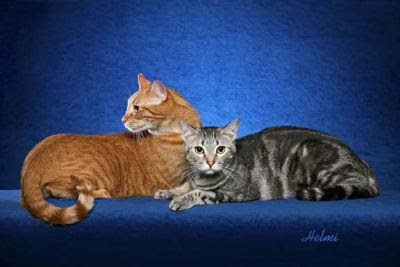 Cats classified as "Household Pets". They are Cathy Aronstein's Household Pets, Bentley and Merlin that were at the TICA Waxahachie, Texas, cat show, 2008. The photograph is by Helmi Flick, copyright Helmi Flick and was taken at the 2007 South Central Regional.

Cats, pilgrims and Thanksgiving have lots in common and we can perhaps thank the Pilgrims for the cat fancy in the United States.

Cats Pilgrims and Thanksgiving to Home page
By Michael Broad at November 26, 2008