This is a post about cat photography with Ken and Helmi Flick at a cat show in Waxahachie, Texas on November 22-23rd 2008. Throughout these days I acted as an assistant to Ken and Helmi, helping to set up the studio and at the end of the day to dismantle it. If you would like to see more, you can see posts about preparation day and day one of the Waxahachie cat show.

Cat photography with Ken and Helmi Flick is exacting. There is a considerable amount of planning, organization and work that needs to take place in order to capture the kind of high quality images created by Helmi and Ken Flick.

Ken's role is a vital ingredient in the process. Ken has built a studio table that can be dismantled, on which the cats are photographed. There are 4 flashlights. The main light is at the front (see below) suspended by a horizontal beam which is supported by two tripods at either side of the room. This allows Helmi free movement in front of the table, when photographing. This light is diffused and soft. There is a diffused light to the right hand side as well. There is also a directional light behind and to the left, which provides a modeling edge to the cat and which picks out the body from the background. Finally there is a small flashlight behind and below the cat which illuminates the background forming a pool of light to provide a central focus; the light falling away at the edges.

Cats are placed on a raised walkway about 12 inches or so wide. This helps to keep the cat in a confined area and positions the cat in terms of distance from the camera allowing for more precise focus and also allowing the small light referred to above, to illuminate the background. The picture below illustrates this: 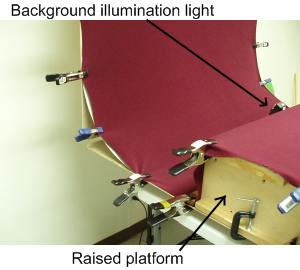 The picture below shows the table in use. Helmi is photographing while Ken teases the pose out of this Bengal cat. This picture also shows the modeling light to the left and behind

Cat photography with Ken and Helmi Flick - Helmi Flick photographing a Bengal show cat at the Waxahachie cat show. The soft frontal light can be seen above Helmi's head.

On day two of the show there were some great show cats to photograph. Each cat dealt with the photographic session is their own way and some were better than others. In general, adult cats who are at their first show are understandably prone to be less sure of themselves and they can present challenges to Ken to get them in an attractive position for the photograph. Ken also says that the Burmese and the contemporary or modern Siamese, for example, can be more difficult to wrangle. While in general, Maine Coon cats, amongst others, are more amenable to being photographed.

Although some of the more experienced cats can strike a momentary pose for the camera, most of the photography is concerned with capturing fleeting moments amongst fairly dynamic movement. This has been teased out of the cat by Ken. It requires split second timing from Helmi to capture the moment, which is frozen with the flashlights. The Helmi and Ken team is a well oiled machine so there is a sort of predictability about the outcome, which makes timing easier but still very critical.

However, understandably, sometimes cats will be uncooperative in the studio. This is their right, of course. On occasion, progress can be made and a good image captured if the cat is left to her/his own devices. Rarely it is not practical to capture the desired photograph because the cat cannot be wrangled into a good position. Naturally, the cat's rights are always respected under these circumstances.

Here are two examples of how cat photography with Ken and Helmi Flick produces the desired result.

Cat photography with Ken and Helmi Flick - Ken wrangling a Bombay cat and Helmi capturing the image. Immediately after this moment the following photograph was captured:

The picture below show Ken actively teasing a Bengal cat into position. This was just before another great picture was captured by Helmi.

Photo above: Cat photography with Ken and Helmi Flick - Ken wrangling a Bengal cat and Helmi capturing the image. The picture below is the photograph that came out of this little session:

It was fascinating and a privilege to see Helmi and Ken working. To those concerned with the technical aspects of photography, I hope you like this post and find it interesting.