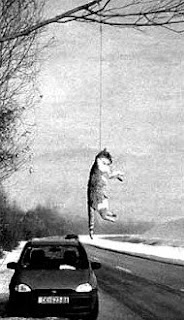 Is Cat welfare in Croatia on the up and up? Croatia has recently introduced the Animal Protection Act (drafted in 2006 I believe -see Croatia Animal Protection Act). It came into force on 1st January 2007. It is quite good. It's introduction and enactment was, one could argue, forced on the Croatian government as it is seeking to become a member of the EU. Their application is still on track despite high levels of organized crime in Croatia.

Obviously decent legislation is a good start, but only a start. Peoples' attitudes need to be updated, particularly in the villages, where it is commonplace, apparently, to see dogs permanently chained up. This is considered normal, obviously. The people who do this cannot have any sensitivity towards an animal's mentality. There is a huge amount of ignorance on the subject of an animal's ability to suffer emotionally. With this I am afraid to see backward and ignorant attitude it is hard to see progress being quick. 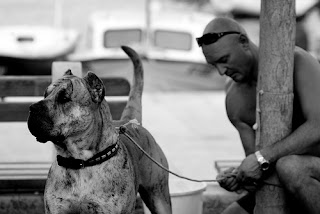 Typical macho alpha male man with alpha dog - Split, Croatia. Photo by joao ornelas. When I see this I don't get good vibes on cat welfare in Croatia. Am I being prejudiced?

There are many instances of animal cruelty in Croatia. It seems to be a male dominated state. Open cruelty seems to have gone unpunished. Animal cruelty and for me cat welfare in Croatia has almost been ignored. One group of people with the correct attitude are the people who run Animal Friends Croatia. They have done good work. There is a long way to go, in my view.

There will be change, yes, but it will take tens of years perhaps 2 or 3 generations before cat welfare in Croatia is on a par with the best countries in the world for animal welfare. This is my personal view. If your differs please make a comment.