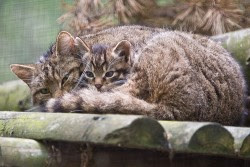 Felis silvestris grampia is in the news and for good reasons, the best reasons. This time it is not more doom and gloom, but news that something is being done about one of the very few large wild animals that we have in the UK. When I mean large I mean large by UK standards. I can't think of many wild animals that are larger (deer, wild boar - not sure if they exist and foxes, which are persecuted appallingly by the upper classes in Britain).

In my post on the Scottish Wildcat on the main website I said it was thought that there were only 400 left due to more persecution (and disease) by good 'ole mankind in all his ignorance. By 1860 they were extinct in England and Wales. But they survived by retreating to Scotland where there is a lower population of humans. They are not, though, found south of the Highlands and are only found in certain areas.

It is now thought there could be several thousand but little is really known about the Scottish Wildcat so the Scottish National Heritage are making arrangements to conduct a survey with the assistance of the public to assess the distribution and population of Felis silvestris grampia.

There are a number of myths surrounding this cat. Some thought she could attack and kill humans despite being the same size as a large domestic cat. Indeed she looks remarkably like a domestic cat except for the way she/he walks (for me a wild cat swagger) a thick set neck, jowly look and shorter tail. But then some domestic cats are similar. You can see how the transference from wild cat to domestic cat took place. Her coat is a tabby coat resulting from the presence of the Aguoti (A) and Tabby (Mc & mc and T) genes. Tabby is the most common mixed-breed coat as it is probably the best coat for survival as it is most effective for merging into the background.

This cat is certainly very good at hiding, preferring to hunt at night and rest during the day. As to preferred habitat they like the woodlands and moorlands and the margins between the mountains and the moorlands. Apparently research has indicated that this cat has habitat preferences that depend on the area because in the east of Scotland the preferred habitat is"marginal agricultural areas with moorlands". And in the west they favor rough razing and moorland. They avoid high mountainous areas and areas where there is intensive agriculture, the latter because understandably they like to avoid us.

The Scottish Natural Heritage (SNH) will tell us more as to population size, the current position being unclear. In a questionnaire of 1983-87 the results indicated that their range was an area north of the Central Belt of Scotland. Another survey in the 1990s concluded that their range was limited to the north-east of Scotland and the eastern Higlands. As to estimates of population density estimates are:
A further survey in 1995 suggested as many as 3,500 Scottish wildcats over 5 months old in Scotland.

The SNH survey, due to report as at March 2009, will help to decide if it is necessary to introduce voluntary (perhaps compulsory - my thought only) neutering and spaying in the areas where the wildcat is found. This is because the Scottish wildcat mates with domestic cats, which obviously weakens the pure blood of the wild cat. This is a major concern to environmentalists in Scotland. More at last is being done to protect a national treasure.

The map below marks out Scottish wildcat sightings: