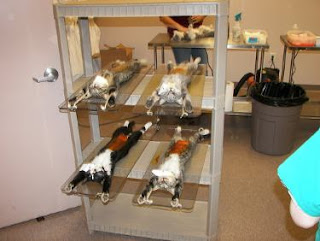 Killing cats on a holocaust-like scale happens every day under our noses and yet is all but invisible. The subject of neutering cats and overpopulation of cats is constantly being raised by concerned groups.

It almost seems as if the world is divided between the concerned and the frankly ignorant. The world is also divided between the beautiful veneer of wonderful purebred cats with great pedigrees and the sordid reality of millions of euthanized cats (many purebred and many more not). There are 2 worlds. We need to open our eyes to the one we would rather not see.

HSUS, the Human Society of the United States is it seems disliked by some cat breeders. They are perceived as being against pet ownership. That's another point. Do we buy and sell cats or do we adopt and keep and care for them. I strongly favor the latter. We are no better than cats, probably worse and no animal including a human animal has a right to own another animal. We adopt and keep cats, therefore.

Humans have a long way to go before they become truly civilized. Cat breeders also seems to hate PETA. There is almost a battle going on. At the root of the problem it seems is the overpopulation of cats and the number of cats that are not cared for properly by humans. Of course humans created this problem. It is born out of self-interest, consumerism and ignorance. Mankind can be horribly arrogant too. He thinks he is better than he is.

It is true that we need to get a handle on the overpopulation of cats and stop killing cats by the million (there is also an overpopulation of humans problem - perhaps the two are linked?). That at least means spaying and neutering all cats. This is tough on cats but the only way currently; and then we need to breed less cats.

Some figures: 70,000 cats are born daily in the USA. 25% of them are intentionally killed daily. Of all pets, about 27,000 are euthanized daily - a true holocaust of gigantic proportions.

I do not think that cat breeders can turn a blind eye to this. 90% (or more perhaps) are extremely concerned individuals and great cat carers. But I hardly ever, if ever, hear them talk about this problem. They more often attack the organisations. Perhaps cat breeders should take up the mantle of educating the public on spaying, neutering, cat keeping and caring. Then they wouldn't have to moan about HSUS and PETA.

They could be the champions for cat care and the overpopulation problem - that would be good long term business too. We need to stop killing cats. You cannot do one (breed cats ) without addressing the other (killings cats).