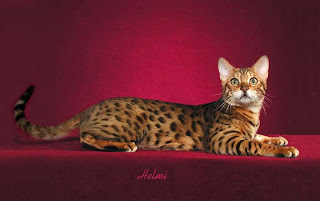 Constantly in the news is the question of Savannah cat and Bengal cat behavior. In fact, the behavior of any wild cat/domestic cat hybridization is of interest to both the authorities and cat keepers or people who think that they might like to adopt an exotic domestic cat.

And time and time again the answer is this. F1 (first generation) - F4 wild/domestic hybrids such as the Bengal, Chausie, Savannah and Safari are able to behave as domestic cats provided they are socialized properly. Yes, they have more of the wild cat traits such as a different voice. They are more active and demanding. They bond very closely with the human keeper and don't like change. No cat likes change though but perhaps it is more of an issue for an early generation wild/domestic cat.

They also sometimes like to go to the toilet in water, a throw back to their ancestors' wild days when they hunted and lived near water courses. The like water generally in fact. But I wouldn't expect all Bengal cats to like water or like water to the same extent. It is just a noted characteristic inherent in this cat. 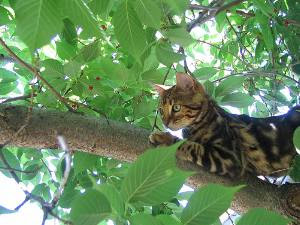 Bengal cats perch on high vantage points sometimes as well. Bengals are athletic and good climbers. They are busy cats. As one author puts it they are not likely to be at the bottom of the pecking order (these are alpha instincts - Helmi Flick talks about this in relation to Chausie she cared for).

Bengals are not shy and defensive (like my girl cat) but positive and outgoing (provided well socialized).

So, that's settled, they can behave in an acceptable way. The human companion though is going to have to do his/her bit. That means more input and the giving up of more time, plus more space for your cat. These cats are not apartment cats, in my opinion.

Then there is the wider issues of, "is it right to breed like this?". What are the problems in relation to wild cats? Is it beneficial for wild cats to breed wild/domestic hybrids? Both sides can find an argument in their favor on that.

Finally there is the issue of regulation and over breeding (is there overbreeding?). There are many issues. For me, I would rather let wild cats be wild cats (I'm speaking here of tamed wild cats such as the Safari cat) and that we live with domestic cats who have agreed to be domesticated. In other words lets do what the cat wants.

Anonymous said…
there are already tens of thousands of bengals in existence. there is no need to start from scratch and breed wild cats with domestic cats. there are some breeders who do this. but i think it's just because they want to. they want to have an excuse to keep wild cats. but there's no reason they have to. i don't think they should be doing it. but breeders who keep the wild cats disagree with me.
4 March 2008 at 11:37

Anonymous said…
I myself have difficulty with the concept of breeding "toy tigers" and such cats. If one searches one's heart you can't escape from the feeling that it is wrong.
4 March 2008 at 13:28

Anonymous said…
Ill tell that to my toyger as she is chewing on your ass, how can you say that this is wrong, i guess you dont agree with breeding horses either.