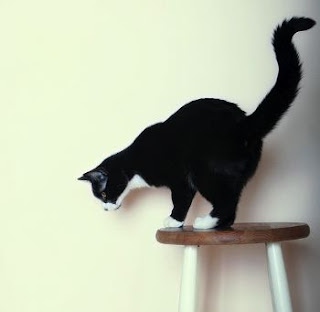 Of the cat coats, tuxedo is another coat color/patten that is one or two steps up from solid black. They are a common type of coat amongst random bred cats but rare in my opinion amongst purebred cats (many breed standards don't allow the coat). A tuxedo cat as we might know is a black and white cat with tuxedo (human male formal suit of clothes) markings. Tuxedo cats are not a cat breed. Neither are calico cats, for example. These names describe coat colours and patterns not cat breeds.

This is usually a patch of white on the face (chin), chest, paws and belly. There is, in fact, a cat that is more black than a tuxedo and that is the "Locket Cat". He or she has a white patch where a locket would be if worn by a human and a small white patch on the belly. Apparently some cats can have only a few hairs of white, so they will be the nearest to solid black as is possible.

Lockets are called "brisket spotting" in cat fancy language. They are "minor white spots". The spots are "irregular in occurrence" and variable in size.  Sometimes they form streaks and they can be connected. It is not known if a single gene is responsible but it is thought that the cause is polygenic. Breeders eliminate this coat characteristic through selective breeding1.

My cat is a tuxedo and so is my most recent stray cat who visits. She does not have much white fur. What causes a cat to have the black and white markings?


The above photo is copyright free but please leave a credit (Michael at Pictures of Cats.org) and a link it you can.

A tuxedo is a bicolor (2 colored cat). There are an endless amount of possible permutations for bicolor cats. The term used to describe bicolors is a "Piebald cat". This is due to the gene that creates the white patches. This gene is the piebald gene or the "white spotting gene".

As the tuxedo or locket cat has white that covers less than 40% of the body the white spotting is called low grade spotting. The cat is still high grade though :)

The genetics of coat colors is a bit of a mine field and it would seem is not yet completely researched. However, the piebald gene is "semi-dominant with variable expression". To me this means its effect can take many forms.

It is thought that the gene dictates the spread of pigmentation during the embryonic stage of a cat's development. The gene affects the embryonic cells that become pigment producing cells. These cells start at the spine and migrate outwards. No pigmentation of the skin and fur will take place beyond the limit of the migration.

Accordingly, if the migration stops short of the entire body those areas beyond the limit of migration will be white (no pigmentation). As the paws and belly are the remotest areas from the spine these areas are more frequently without pigmentation and are white. The tuxedo pattern is thus formed. That's the theory at least. You will though see some tuxedo cats with white fur on or near the spine. These cats are better described as bicolor cats.

The tuxedo is a beautiful pattern but we are so used to it we sometimes fail to see its beauty.

Here are a couple of tuxedo cat pictures:


The next photo is of a moggie that is also a show cat. You can show random bred cats as "household pets" at cat shows.