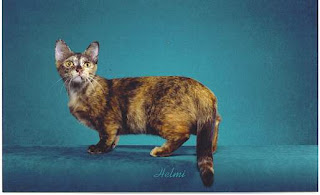 Terri Harris established the Kinkalow Dwarf Cat breed in the mid-1990s and is a major figure in the dwarf cat world.

Munchkins are the founding dwarf cat breed from which other dwarf cats are bred. For example, the Kinkalow mentioned above is a cross between the American Curl and the Munchkin. You can read about the Munchkin and Kinkalow on the main website.

Terri has brought over the three Munchkins to be used in a breeding programme by Wayne, a Scottish cat breeder. They were imported under the Pet Travel Scheme. At the time of writing the cats are waiting to be released from quarantine and transported to Scotland.

Wayne is registering with TICA being a GCCF cattery already. It seems he is planning to import some more Munchkins later this year.

You can visit Terri's website by clicking on this link.

From Munchkin Dwarf Cat in UK to Home Munchkin
By Michael Broad at February 04, 2008