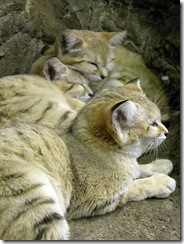 The sand Cat. This is a thumbnail. Photo by carinemily (Flickr - opens new window). As can be seen this is a small cat averaging 6lbs in weight, a little under the average of domestic cats I would have thought (see Largest Domestic Cat Breed (new window) for size comparisons)

The scientific name for this small wildcat is Felis margarita and four (src: IUCN) subspecies have been “classically” described. Other sources say that there are 6 sub species:

The IUCN Red List for Threatened Species™ classify this cat NT – Near Threatened - “species or lower taxa that may be considered threatened with extinction in the near future, although it does not currently qualify for the threatened status. As such the IUCN (new window) notes the importance of re-evaluating Near Threatened taxa often or at appropriate intervals.” (src: Wikipedia®). The listing of Near Threatened would seem to be under review as further research may indicate a different classification. Further research is needed generally.

The assessment is based on these findings: 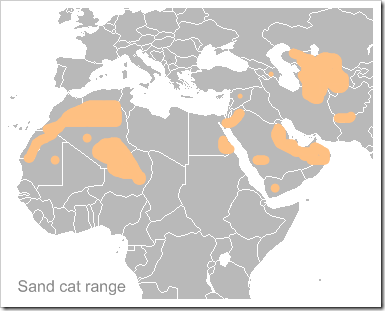 The map was made by me from a blank world map made by User:Vardion and adapted by User:E Pluribus Anthony for Wikipedia®. This is permitted under under Wikimedia® creative commons license = Attribution-ShareAlike License. The source is IUCN Red List of Threatened Species™ . This is a fairly rough map but gives a good idea of the range. To get a feel for what the landscape is like on the ground the picture below is of the Caspian sea coast from Turkmenbashi headland, Turkmenistan. The picture is a thumbnail and is by Citt (Flickr - new window): 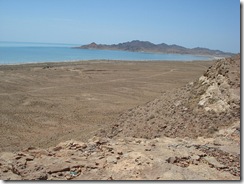 And this is a Google map of the area:

View Larger Map
Note the sandy desert terrain and sparse vegetation where they feed on small rodent prey. They burrow so the soil cannot be compacted. They have acute hearing, greater in range and sensitivity to the domestic cat which is used to hunt nocturnally. Other prey includes:
The Sand Cat is well adapted to desert life being able to survive off the body fluids of prey instead of drinking water. As mentioned, they are nocturnal hunters with a large range of 16 km² to 40 km² .

This is an early post to which I added the above text etc.... 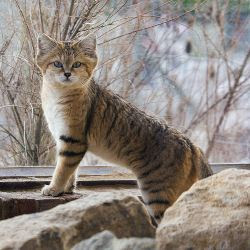 Another cat with acute hearing (due in part to very large ear flaps) designed to hear rodents underground is the Serval. The Serval is bred with a domestic cat (Bengal) to produce the Savannah, a majestic cat. The Serval although wild is tamed to be a domestic cat, albeit rarely and under carefully controlled conditions.

Other wild cats that are important to us and which look like domestic cats are the American Bobcat and Scottish Wildcat. Both are bigger than the Sand cat however.