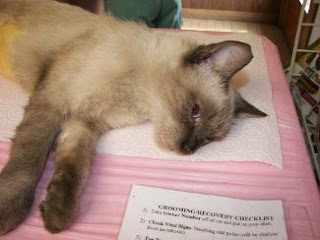 Killing cats (the cat opposite is not dead just under anesthetic) (and dogs) goes on all the time, unnoticed by the vast majority of the population. PETA (People for the Ethical Treatment of Animals) are hostile towards cat and dog breeders. Cat and Dog breeders are, in response, hostile towards PETA.

I'll refer to cat breeders for the rest of this as this is a cat website. Cat breeders' hostility is due to the fact that PETA blames cat breeders for increasing the cat population when there are already too many domestic cats. They have produced some startling videos in which they say that if a person buys a cat one is killed (they actually refer to dogs but I guess the same rule applies), meaning that the cat in the rescue center should have been adopted and if not she will be killed.

They also suggest that the breeding of purebred animals is akin to being part of the Klu Klux Klan in that the intention is to make a superior race of animals (purebred cats or dogs).

It is impossible to ignore these arguments if you are a decent sort of individual with the welfare of cats in mind as opposed to simply pandering to the preferences and likings of mankind.

I am forced to think about this topic. I think the idea that cat breeders are trying to breed a master race of pets is manifestly incorrect. 99% of cat breeders in the USA (my guesstimate) are in the business of breeding as an expression of their love for cats and to make some money (not necessarily a livable income) on the side. They genuinely have the welfare of cats in mind. 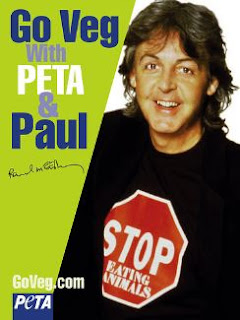 eed purebred cats) for the general problem of the uncontrolled breeding of feral mixed breed cats (other than the same responsibility we all have for that problem). However, I don't though think that cat breeders do enough to deal with the problem of abandoned purebred cats.

There are, it seems, many purebred cats that are abandoned. This seems peculiar as someone, I must presume, bought the cat. I myself don't like the idea of buying and owning cats - we don't own them. Perhaps it is better to say that when a person buys a pet he or she actually compensates the breeder for the care of the cat and the mother and father cats until handed over to the new keeper. The abandonment of a cat that was bought indicates that the buyer thinks of cats and animals as a "product" like a washing machine. They are not fit to care for a cat. How do we spot them and refuse them a cat?

I think then that cat breeders should do more to ensure that "buyers" are absolutely under an obligation to neuter (if not already done by the breeder) and care for the cat throughout her life. This may be difficult to enforce but I would have thought it was not impossible. I know some (perhaps many) breeders who do take action along these lines.

What I am saying is that it is better to work with breeders and make the breeding process more accountable rather than stop it all together because cat breeding is the kind of thing that humans like to do. It is difficult and probably foolhardy to try and stop humans doing what comes naturally to them even if sometimes it seems morally wrong. It is better (and more successful) to work with it and modify the behavior and achieve gradual change that way.

In order to be fair, PETA should also look at the other end of the process, the buyers. They are the ones who are abandoning cats. It is they who make the market that allows the cat breeders to produce more cats. If they was no market there would be no breeders.

Also, it seems that by far the biggest reason for the overpopulation of cats and subsequent horrific euthanizing process is the feral cat population that is out of control. There are some brave and honourable people who do something about it (trap, neuter, return) but generally it seems this problem drifts on. PETA don't seem to do much with regard to that problem.

Lets see PETA tackle the bigger problem first and then lets refine the breeding program. Finally I do not think that cat breeders even think about breeding a master race of cats. They just like the look of fine and attractive animals, a natural human instinct, which admittedly needs regulation and control in the interests of the welfare of our much loved cats.