- February 02, 2008
What makes a black cats black and where do they stand in the huge range of cat coat colors? There is a bewildering array of cat coat colors. I thought that I'd do a series of articles on the spectrum of colors all the way from Jet Black to Ice White, starting at black. In addition, the patterns will be discussed as these break up the solid colors.
A cat's coat is black because the pigmentation in the fur absorbs a substantial amount of light, whereas in a white cat the opposite is the case, the light is reflected.

It is the interplay between these genes that determine coat color.

Black cats are called "solids" in the cat fancy. The solid color breeds (also called "selfs" but I don't know why) have colors, black, blue, chocolate, lilac, cinnamon and fawn. The black color is due to the presence of microscopic granules in the hair (black pigment), which absorb the light. In a black cat these granules are called eumelanin or 'melanin' for short. They are spherical in shape.
The Genes

It is thought that the black cat is a very early mutation from the wild cat tabby coat. Robinson's Genetics says that the black coat is a result of a change (mutation I presume) in one of the genes that dictates the agouti background color. This is because the individual hair strands do not have the banding of yellow pigmentation that is produced by the Agouti gene and are instead mainly black throughout. Any color change of the hair is at the base near the skin where it will be grey (smoke like color).

The browning gene dictates the production of eumelanin in black cats. When the gene is dominant the cat is black. There is also the action of the recessive non-Agouti gene (aa) that suppresses the more natural effect of banding on the hair follicles resulting in solid color. In fact, all self-colored cats have the non-agouti gene shown as aa.
RELATED: Rusty red black cat fur caused by defective pituitary gland?

The genes present in black cats are then the non-agouti recessive aa, plus the gene producing black pigmentation B, plus another gene symbolizes by D for dense coloring. A black cat will have these genes present. The non-agouti is always recessive while the alleles of genes B and D can be present as both dominant (BB, DD) or one dominant and one recessive (Bd, Dd).
RELATED: Are black cats friendlier?

Cat breeders will seek a jet black but sometimes a rusty brown tinge is shown. Black Cats showing this phenotype (appearance) would normally be excluded from the breeding program unless there is a pressing reason as to why not. An influence on the density of black coloration is sunlight. Apparently, sunlight and the saliva deposited when grooming combines to oxidize the pigmentation to produce a brown tinge.

You can see a rare black Maine Coon cat by clicking on this lick. If we go up the sc 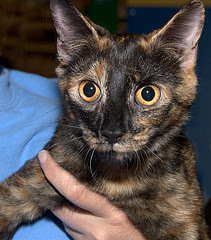 ale of colors to the next level we would probably have the Black Tortoiseshell coat (Tortie) see the picture right. Tortoiseshell is a mixture of the base colors referred to above, black and red. Both these colors are apparent on the coat. The introduction of the red (or more commonly called orange) breaks up the solid black coat.

Finally, it is thought that as the most natural coat color/pattern is the Tabby (as it is the best in terms of camouflage), possibly the first genetic mutation (affecting a cat's coat) was from that natural state to black.

You can see all the posts on coat colors by clicking on this link.