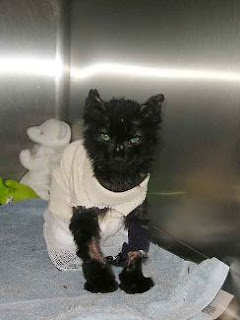 Only humans can be cruel. Animal cruelty to cats is not uncommon. Although there are many gazillions of fine people who are tender towards cats and love them and animals generally. Sadly, some people and it seems an every increasing number of young people, have never been taught how to behave towards our fellow creatures (nor for that matter towards each other).

There is a lovely but tragic and heart-rending story on Flickr about a burned cat called Adam. He is a young cat. This happened mid July 2007. I'm posting it here as I hope it will get read more here and to remind us how cruel and idiotic this world can be. Most of the world's problems come down to plain ignorance and education (or lack of it). Some children in the UK are feral.

Adam was an 8 week old feral cat and in a cage when two fifteen year old girls apparently poured flammable liquid on him and set him alight. He lost his tail and ear tips and large areas of skin from his back and a lot more - his injuries were horrific in fact. The picture tells the story.

I don't know if he survived; he fought for his life with the help of a kind vet, Dr. Katheryn Hinkle, who worked free of charge. He had several operations. Adam, in fact, was one of several cats trapped and caged ready for neutering when this happened. He was left outside in the cage overnight (I am not sure about the morality of that either).

The vet said the children who did it needed more help than little Adam. In a testament to the beauty and forgiveness inherent in cats, Adam liked to play with people at the surgery despite his injuries. I love Adam and all vulnerable feral cats. Please don't harm them. We put them there.
By Michael Broad at February 15, 2008