Cats indoors or out 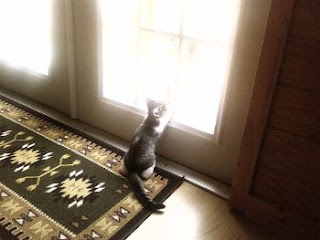 Whether to keep cats indoors or out depends mostly on whether you're American or a Brit. I don't know enough about the other countries in Europe but I would expect them to be same or similar as the UK in their attitude to cat keeping.

But there is a huge difference between the UK and USA. For me, a Brit, it is a little surprising to read about the very high (by British standards) percentage of cats pedigree or otherwise that are permanently kept indoors in the States. There are though many more pedigree cats in the States and there are many more cat breeders there too. This is a factor I am sure.

However, the starting point is the mentality or culture of the people of each country. Americans it seems more or less expect to keep their cats in; the opposite starting point exists in the UK. Many British people let their cats come and go as they please unless there a good reasons why this shouldn't happen (e.g. a road nearby). This is because we believe cats naturally like to roam and have some territory. For us to "bang 'em up" as in prison feels unnatural and almost cruel. Sure it would also be cruel to negligently let a cat out near a busy road but is it better to let a cat have a happy natural but shorter life rather then a long and stagnant one? (this is a question please note not a statement). And if we do let 'em out a Reflecting Cat Set with Lead Collar

The truth is we shouldn't keep cats unless we can guarantee an environment that is right for them. Which means letting them go out safely. One obvious answer is a large cat enclosure. These are expensive but very safe and reassuring for cat and human.

I just think that at a fundamental level we have it all wrong. We keep cats to serve our interests. We do it for ourselves. As a result the cat's interests are ultimately secondary. This is also manifest in the new trend to buying dry cat food - extremely convenient and the manufacturers know this but not necessarily good food for cats - there is arguably too much starch and carbohydrate.

It seems that some Americans keep cats in because they think a cat's life span will be 2 years or so if they let her out. If some think that it is a slight misconception. A true feral cat (living out all the time) has a 2-3 year life span. But a cat in a nice home that is let out into a garden and where there are no abnormally high risks will live as long as an indoor cat. They also keep them in because of "sicko" (an American term) people who want to hurt cats, dogs that attack cats and in some States there are leash laws apparently.

HSUS recommend cats are kept in as far as I remember. Is America more hostile for a cat than Europe? I would doubt that. Yet the vast majority in the UK let their cats out. This is more a culture thing and the culture in the US is "keep in" for perhaps the majority.

We should also reduce the breeding of cats until we have resolved the problems surrounding stray and feral cats. There is too much self interest, arrogance and ignorance in the world.

Update 5th November 2008: This is what a cat owner in London, England said after his cat had been brutally injured in the Croydon area of London. "............you can't be cruel and keep your cat indoors".

This is rather strange and interesting and shows a complete culture difference to Americans. I don't really know who is right. The Croydon area recently suffered a spate of horrendously sadistic attacks on cats that were let out. It is the norm in the UK to let cats wander about the environs of the home. One cat was decapitated. Another had his belly slashed open. The person who I quote above had a cat that had a chemical poured over his head. The skin fell off and the cat put down. The cat with the slashed stomach was also euthanized.

Yet this person still thinks cats should be free to wander. A very small and cute black cat I see outside the kitchen window crosses quite a busy road, frequently. He waits and watches. I can't watch and it is agony for me. One day he'll get it wrong. And I might have to deal with it. He lives with the neighbors. But in England these days if you ask someone to do something no matter how gently (i.e ask my neighbor to keep their cat in or better still build an enclosure - they are well off with a large garden) you get insulted normally. So I keep quiet.

Under the Animal Welfare Act 2006 if the police catch the perpetrators of the above crimes they could on conviction be imprisoned for up to 51 weeks and/or fined a max of £20,000.

The root problem is as above. We must try and make the world less hostile to cats or not bring them into the world. Or if we keep cats in we have the added burden of entertaining, exercising and stimulating our cat.

Update 21-11-08: This is a submission by someone who having read this post made his own having totally misunderstood what I am trying to say: Idiotic and out of touch indoors or out.

I am not saying that cat owners should let their cats out. I am saying we should not introduce cats into a world (i.e. through irresponsible or unplanned breeding) when we have to keep them indoors all the time. This can only mean that we have created a world that is unnatural and hostile for a cat so we have to create another world for him or her, the indoor world. I find that odd.