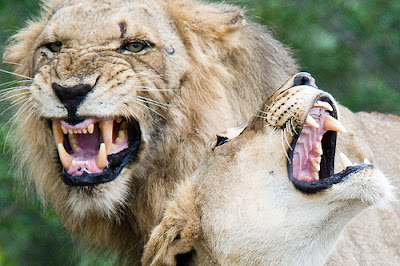 As expected there is a great similarity in the procedure used by Lions mating as is used by the domestic cat. After all, bottom line, the domestic cat is a tamed wild cat, although she has been domesticated for about 10,000 years so we can forget that she has a lot of wild cat in her, until she goes hunting in the garden.

A Lion pride is a very promiscuous group of animals. Each male in a pride mates with any female and each female with any male. It's a free for all. The procedure is typically kicked off by the female who is in heat (click on the link if you'd like to read about domestic cat heat behavior as it is very similar). 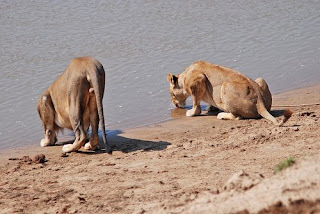 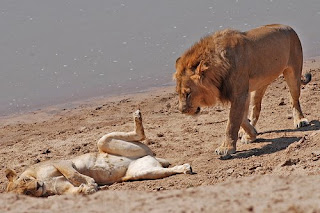 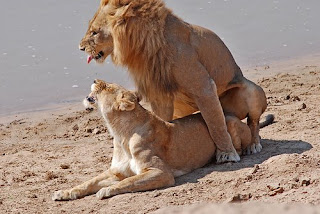 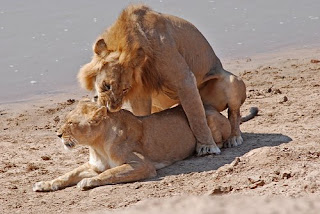 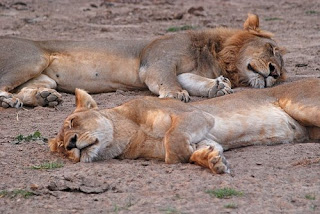 The Lioness will encourage the male by head rubbing and gentle prodding. The male will sometimes ignore this until encouraged some more. The female will also engage in playful behavior rolling on her back, for example. Females will present themselves as ready for sex by getting into position for it by raising the hind quarters and flattening the back.

It seems that a male may have a choice of females at this stage and exercises that by mating with the first female he comes across. The actual act of sex is usually initiated by the male. The female beginning the whole process and the male taking charge of the sex act (copulation).

Copulation is short and rather uneventful. As for the domestic cat, the male gently bites the back of the female's neck. This is to make the female passive. It is using the natural hard wired instinct of the kitten (and when, adult the cat) to go limp when picked up by the mother by the scruff of the neck to be carried to safety. As mentioned, copulation is brief and lasts about 30-70 seconds. An audience of people (not infrequently the case it seems) does not distract Lions mating. Unless you're on your toes, you might miss it.

Lions mating in this manner will be repeated over a 4 day period every 25 minutes (I can see why the male needs some encouragement after a while). Although 90% of the time everything is done correctly and effectively, conception frequently does not occur. As is the case for the domestic cat Lions are "induced ovulators" which means the female will ovulate at any time when induced as opposed to a regular cycle for humans.

It is not clear why the success rate is poor for Lions but it may be due to the induced ovulation process resulting in ovulation at the wrong time. New males have a particularly high failure rate for conception. Apparently research indicates it takes 6-9 estrus cycles for the female to get used to the new sperm.

If they conceive, gestation is for 3.5 - 3.75 months and the average litter size is 2.5 cubs. Females in the pride tend to synchronize the procedure so that the mating and birthing process is acted out in unison amongst the pride members to maximize the communal advantages of a pride.

A male Lion's mane indicates to a female his virility. A dark mane of short or long length is preferred by females as it indicates a healthier male.


From Lions Mating to Cats Mating