What do Ligers eat 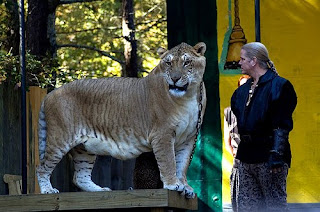 What do Ligers eat - photo by Jim Murphy

The simple answer to the question, "what do Ligers eat?", is what they are given by the zoo keeper (which will be meat). It is highly likely that all Ligers are man made hybrids that are bred to entertain people. This is the harsh truth; it is purely about commerce and Tigers and Lions are exploited. Although the pretext for keeping large cats in zoos is one of conservation and preservation. For the Liger there can be no argument about preservation as the animal doesn't exist in the wild. 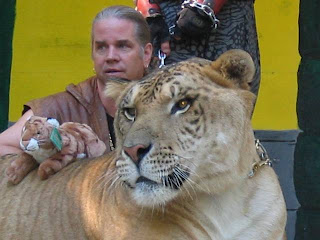 Although Tigers and Lions can mate in the wild this is almost certainly not going to happen today due to the dramatically reduced population of both species and the fact that they have different habitats, which do not integrate. When a female Tiger and male Lion do mate they produce the Liger.

A cat is a obligate (must eat meat) carnivore. In the wild a Tiger's favorite food is Deer and Wild Boar but this cat will eat a wide range of large and small mammals and including fish, frogs and crabs and some vegetation such as grass to aid digestion.

The Lion in the wild will eat any medium to large mammal, such as Buffalo, Zebra, Wildebeest, Impala, Gazelle. See a full page on What Do Lions Eat?

So, in conclusion, the Lion and Tiger eat similar prey. The difference is probably dependent on the slightly differing habitats. In other words what is living in the habitat with the Lion or Tiger if it is a med-large mammal (usually) gets eaten. These cats are looking for meat (flesh)

Back then to the original question, "What do Ligers eat?" They eat the flesh of other animals that zoo keepers usually give large cats. This is probably the flesh of cattle (livestock, including the hide and bone to mimic the wild and as roughage) as it has got to be readily available (although it probably comes from various sources). In some less scrupulous zoos processed, frozen meat is fed to these animals.

Both these cats would and do eat livestock in the wild as their habitats overlap with that of farmers.

What do Ligers eat - Photo second down: published under a Wikimedia creative commons license (2.5). The photo is by Andy Carvin at a Renaissance Festival in Massachusetts. The person behind the Liger is the trainer. This cat is called Hercules and he weighs 900 lbs, currently the biggest cat in the world apparently. I believe the same cat is in the heading picture also as the same trainer is present.

What do Ligers eat - Sources:
What do ligers eat to Home Page