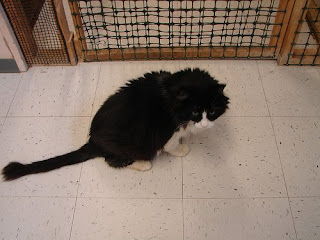 photo by Tjflex2 (see story below)

How to euthanize a cat? Why talk about such a morbid subject? Because about 2,100,000 (or more) cats are euthanized in the USA every year in animal shelters. Euthanasia means a pain free and stress free death. Did every one of the 2.1 million cats euthanized at shelters die a pain free death or are we causing a combined mass of pain and in fact simply killing cats?

It make me very sad to think of it but what we see is not what actually is. It has always been that way. A lot of what happens in the world is out of sight and out of mind for most of the population. Plus there is still a lot of work to do on education. So this post deals with an almost taboo subject, the legalized killing of animals and particularly cats. 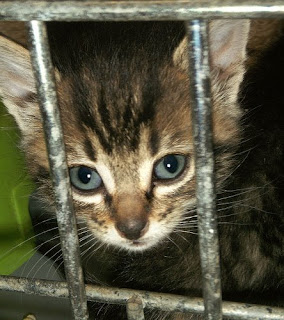 The Times newspaper (in the UK) reported, on January 16th 1928, a criminal case of animal cruelty in which a certain Richard Johnson Sargent had been charged with causing unnecessary suffering to 2 cats. He had been prosecuted by the RSPCA (Royal Society for the Protection of Animals). Sargent was a veterinary inspector to the Guildford Council (the city of Guildford). He had, over a 2 year period euthanized cats (600) for a Guildford society". It doesn't say what society or why he was killing (euthanising) such a large number of cats (we are still killing them....). How to euthanize a cat is slightly different to how to kill a cat.

Anyway he used Chloroform, which was a fairly usual method in those days 80 years ago. He'd put the cats in a closed box with Chloroform and wait about 30 minutes. It was alleged that when he took them out of the box after 30 minutes and took them to the "destructor works" (whatever that is) they were breathing so he hit them with a sledge hammer. That is the gory and very sad story. He got off because it was found that he had committed no crime.

The Delaware legislation (Chapter 80) still allows killing shelter animals by Chloroform. Other States might as well, I don't know. Howev 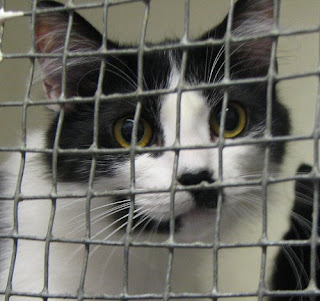 er, Chloroform is hazardous to humans (carcinogenic) and is toxic to mice (so for killing animals after animal experiments it is unsuitable as I presume that the fumes could hurt other animals that are due to be experimented on and then killed) (source: University of Minnesota Euthanasia Guidelines). Minnesota University recommend several ways to kill a cat, one is an intravenous Barbiturate Overdose (100 mg/kg).

Carbon dioxide poisoning and decapitation of an awake cat is considered unacceptable. I feel better now.

Back to the question, "how to euthanize a cat"? HSUS recommend an intravenous solution of sodium pentobarbital by a trained professional. This is a short acting barbiturate. It is an anesthetic agent. It is almost impossible to find out how it kills but it is a respiratory depressant, so this may be the cause of death (i.e. the drug stops the animal breathing). I don't know if it is painless but it looks that way.

But are shelters killing or euthanizing cats? The simple answer is that many are killing them, according to Peta. They say that many shelters kill rather than euthanize cats (and dogs) by using the following methods:

---Can you euthanize a cat by carbon monoxide poisoning? Peta says that this method caused great distress and animals scream as they gasp for air. If that is true this is simply killing. Humans have died from carbon monoxide poisoning from defective boiler flues. As far as I am aware people have been killed in their sleep so this would indicate that it does not cause suffering.

---Can you euthanize a cat by shooting? I am surprised to hear that this happens. Clearly this can cause suffering. No comment needed.

---or can you euthanize a cat by electrocution? This causes pain and suffering obviously. We don't even kill human criminals this way anymore (in the US) although it is yet to banned (it is "optional") in some States as a form of execution.

---then there is decompression. This is unusual and unknown by most people I would guess. This simulates an ascent to a great height in a very short time causing gases in the cat's body to expand causing accute discomfort. It can go wrong too so has to be repeated sometimes (rarely I would hope). It frankly sounds horrible and it is a widely used method apparently.

This comes from the Times Archive. Cat shelters were needed 100 years ago and cats were routinely killed (possibly euthanized) in shelters then. Tottenham Cat Shelter was opened by Lady Donegall. From March 6th 1909 to May 24th 1909, 80 cats were sheltered of which 60 where euthanized by putting them in a "chamber" (I'm going to guess that this was a chloroform chamber). If a cat was ill when recovered the cat was "destroyed". Cats were automatically destroyed after 7 days. I understand that about 75% of shelter cats are still "destroyed" today a very similar percentage to that of 1909. Nothing therefore has changed in 100 years of the domestic cat living with humans.

What happens to killed or euthanized cats?

I don't know but I'd bet my last dollar that the flesh gets used in pet food, the cartilage gets used in glue or whatever and the fur gets used in accessories and other consumer items. Is the commercial market behind the feral cat problem? If I am correct the stopping of the supply of dead cats to manufacturers would be a nasty shock to them. 2.2m are destroyed every year. Where could they get other supplies? Shock horror.....Maybe we can't solve the feral cat problem because bug business wants it to carry on.

Although on many occasions in animal shelters we are euthanizing cats (killing them in a painless way), there would seem to be a large number of incidences when we, in fact, kill them. As the number of deaths is very large this probably means that a lot of pain and distress is caused. This implies a total failure on behalf of humankind. We adopt cats. We accepted their domestication. We now abandon and kill them. Is this proper behavior and why is it going on and on without radical solutions being found and implemented quickly?


Don't euthanize a cat - The Photo heading this post

The photo was posted in 2006 so things may have changed but this is his story in summary. This boy is called Babado. He has a will to live and is an inspiration. He suffers a neurological condition and was brought to a shelter (where the photographer works no doubt). He was cared for and he recovered a bit and then relapsed and recovered again. During his good spells he was a great character and no doubt amused all who come into contact with him. He stayed at the shelter for at least 3 years. I know there is a lack of space and this can't happen everywhere but we need to find a long term solution to the overpopulation of domestic cats and feral cats.

Photo second down on RHS - by cobalt123 - all photos published under a creative commons license.

From Euthanize a cat to Home page