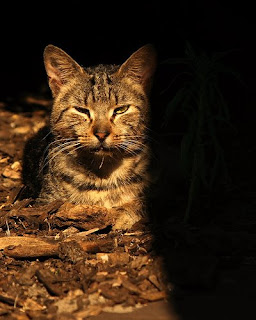 The feral cats of Australia are being inhumanely persecuted and killed on the instigation of the authorities it would seem. If so, they are the innocent victims of errant human behavior. But there are many Australians that are sympathetic towards the feral cat.

The feral cats of Australia are in the news either directly or indirectly. There are apparently 12 million of them. For example, recently there was a lot of talk about the importation of the Savannah cat into Australia by a cat breeder. The Savannah cat is a large domestic cat, a wild cat hybrid (Serval and domestic cat). All the talk was about how this cat could or would kill native wildlife etc. There has been a lot of discussion about banning the importation of this cat. As at August 2008 the latest news is that this cat breed has been banned. Although I understand the concerns, I have my say as to why the Savannah cat ban in Australia is wrong. Scientists often present research papers on how the domestic cat kills wildlife, especially it seems in Australia, no doubt born out of concern for the environment but there are political issues at stake too.

It has been claimed that feral cats kill a substantial amount of native species wildlife. But the big question is, is this true? Are the scientists skewing research against the feral cat for political and/or personal reasons? There would also appear to be a feral cat problem in Australia that is similar to that found in the USA. The climate in Australia is more conducive to the survival of feral cat colonies, I would have thought. Of course the origins of any feral cat problem is in human behavior, irresponsible ownership born out of ignorance often. The answer will always be in dealing with that. Dealing with the cats is dealing with the symptoms only.

The Australian government (at 2004) says that the feral cat is an "invasive species" and that it has caused the extinction of some species on islands (they refer to Macquarie Island) and contributed to the disappearance of some wildlife on the mainland. No hard data is given to support this as there probably is none (if I'm wrong please tell me and point me in the direction of verifiable and reliable data, thanks). This is supported by the fact that they say that are collecting information.

There is no doubt though that feral cats pose a problem but it is a problem that has been caused by us and neglected by us, which has exacerbated it. Domestic cats were deliberately allowed or encouraged to become feral in the 1800s in Australia to help control rabbits, rats and mice. Feral cats live off rabbits mainly so the rabbit population has helped the feral cats of Australia to survive.

It would seem that the Australian government is promoting the view that feral cats are a major hazard to humans and wildlife and need to be killed as quickly as possible with no regard for a humane approach. This flies in the face of their website in which they talk about humane methods. They recommend trapping and shooting the cat in the trap, using 1080 Feral Cat Baits (a poison) and so on. Obviously the situation is bad for cats. This is just so typical of humankind. We really need to look at ourselves very hard and ask are we behaving in a civilized manner? The point is it slaughtering feral cats by the thousands/millions doesn't work - see this post.

The Wikipedia author is I feel biased against the feral cat (other people think the same about this author, I believe). What I am concerned about is that controls will be put in place that are cruel and cause suffering to feral cats in Australia if biased arguments are presented on high profile websites. This would be unjust because as mentioned feral cats are the innocent victims of human behavior. To kill them cruelly would compound our error.

We need to keep a balanced view and think long term. The classic trap, neuter and return (or re-home) will, if carried out on a large scale and in a disciplined manner reduce the population of feral cats of Australia in time. It is something that should be seen as a very long term project. To think short term (a habit we tend to get into) will result in unjustified cruelty. And there are many people who will take the law into their own hands and start (this is probably already taking place) killing feral cats by poisoning and shooting them, as examples, if encouraged indirectly by irresponsible pronouncements of the government and "experts".

I could write more and provide tons of detail but it makes me sick to write about it and take it from me there will be a lot of cruelty perpetrated against the feral cats of Australia who are the innocent victims of human behavior.