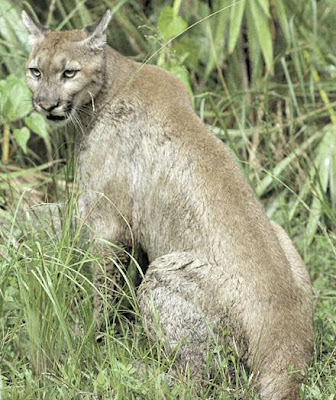 A report on the Florida Cougar, by well qualified scientists (4) was published in 2003, which is now available for all to see. The report was designed to review all previous reporting on the Florida Cougar (called the Panther in the report). This was required due to complaints about previous reporting, which painted, it was felt, an inaccurate picture. It would seem that there is a lot of pressure from commerce and particularly land developers in Florida, which may have resulted in skewed reports being completed, which allowed (or by implication potentially allowed) development of certain areas within the range occupied by the Cougars.

It is the ever present battle between businesses (who by their nature have a lower than usual concern for nature and the environment) and people who think that quality of life including the lives of fellow creatures is important. It could be argued that quality of life is becoming a more pressing issue as the development of economies in 2008 still by and large takes precedent over the environment. Mankind often makes corrections too late, when if is harder to change course. This appears to the case with the Florida Cougar and many other wild species including the Bengal tiger, White Siberian Tiger and in the no too distant future the Cougar.

This post is an attempt to summarize, in laypersons language, some of the major issues. It is not meant to cover all the issues but simply bring to the notice of some people some of the factors that concern the preservation of this critically endangered wild cat.

Although the Florida Panther is still listed in reports as a sub-species of Cougar it seems that it is now considered to be the same species as the North American Cougar. Click on this link if you'd like to read more about the wild Cougar of North American.

Florida is a peninsula and therefore almost an island. A actually island that has a population of Cougar is Vancouver Island, Canada. The Florida Cougar is the only Cougar as far as is known living east of the Mississippi in America.

Having read the meat of the above mentioned report it seems to me that the findings were in broad terms as follows:

1. People do not know enough about the Florida Cougar, which makes decision making difficult. Not enough data has been collected in respect of the Florida Cougar and some that has been collected is based on selective data (perhaps to fit a goal). For example there is inadequate information (not reliable enough) about the numbers and the density of Florida Cougar. This seems like fairly basic stuff and indicates the shortage of information in other areas of research. One problem no doubt is the secretive nature of the Cougar but one would have thought in 2008 a reliable method could be found to measure numbers. The problem no doubt is one of desire and this may be due to pressure from local business. In truth the Cougar has been corralled into a human environment over time and it is going to be extremely difficult to make the relationship between human and Cougar work in Florida. Already the range is far too small for the Florida Cougar, which implies that action to protect this animal in this area is too late.

2. The report recommended a vigorous approach to assess the reintroduction of the Florida Panthers into at least one other area outside of South Florida. I presume (and please correct me if I am wrong) this is due to the range in Florida being too small to sustain the Cougar. When an area is too small for a wild animal you are likely (or certain?) to get inbreeding, which will lessen the chances of survival of the animal.

3. The report concluded that there has been inbreeding in the Florida Panther (the Cheetah is also inbred and captive big cats such as the White Siberian tiger is grossly inbred causing physical and mental abnormalities which are kept away from the public). They concluded that the loss of variability (loss of genetic variability) occurred from 1890-1990 a period of 100 years.

It had been suggested that this was due to the fact that the Florida Cougar lived on a peninsula but the report writers said that the Cougars of Vancouver Island in Canada were far more genetically diverse notwithstanding a poorer environment vis a vis prey.

Due to inbreeding the condition "Cryptorchidism" (the absence of one or both testes from the scrotum) had gone up by a factor of 400% over the period 1970–1992.

They concluded that the reason for "genetic erosion" was because of (a) human activity (recent anthropogenic isolation) before 1995 and (b) reduction in the Cougar (P. c. coryi) population.

4. There was a shortage of data about the Cougar's prey and therefore they could not be sure that sport (recreational) hunting had an impact on "Panther fitness" but it probably had little impact.

5. Earlier reports about the preferred habitat of the Florida Cougar had been misleading despite those reports being carried out objectively (this last point was stressed). The report's authors concluded that an earlier report stating that 96% (almost all) of the Florida Cougar's territory was no more than 90 meters from forest patches was incorrect and there was no information to support that finding. This earlier finding was used as a standard for decision making in respect of building developments and in lessening the impact on the Florida Cougar.


My personal conclusions (I am a complete layperson)

The situation regarding the Florida Cougar is a precursor for what is to come in other parts of the USA with respect to the Cougar and of course endangered wild life generally. It is only a matter of time (perhaps 30 years or more) for the same things to happen in other areas of the USA which are going through a substantial human population growth. To look into the future one only has to look at other countries that are more heavily populated such as Bangladesh (the major home of the Bengal tiger, which is heading towards extinction in the wild).

I am personally pessimistic about the situation for the Cougar in Florida. In truth it seems that this animal is already living in a human world and in, therefore, a kind of extended reserve, compound or zoo and this can only get worse no matter how many enlightened reports are written by experts.

Ultimately it is the politicians who act on the reports and they have to read and understand them. They are invariably pressured by voters and in turn by business. Until now business has always won when it comes to the big decisions.

Photo:
Published under Wikimedia Commons which in turn used this photo as it is in the public domain because it is a work of the United States Federal Government under the terms of Title 17, Chapter 1, Section 105 of the US Code.
Email Post
Labels: Cougar Wild cats