Thai cats are Classic Siamese cats. Well, in my opinion they are. The Messybeast author says that the classic Siamese is the Modern Siamese; this is wrong I am sure. The word "classic" conjures up authentic or old, the opposite to modern. Before I proceed let me say that my views as stated here might seem provocative or downright incorrect by some people in the cat fancy, particularly the people who produced the Thai cat! But this site is not written in the style of an encyclopedia. I don't regurgitate the "facts", I give my views on what I have decided is the truth. It is extremely factual but facts are often modified by opinion even in encyclopedias. I'd like people who disagree to tell me by leaving a comment if they can spare a moment.

Update 19-5-09: I am pleased to have received some information on this breed from Dr. Cris Bird, President PREOSSIA; chair of Thai breed, TICA. I have added her comments below.

Update 29-12-09: I am also pleased to hear from Mary Alexander of Blue-Gem Siamese. Please see below.

The Thai cat is a new/old cat breed. This new breed is a reflection of the drift back to the way things were in the Siamese cat world until about the middle of the 1900s (about 1960 to be more precise).


"My cattery is registered in WCF (World Cats Federation). In this association the Traditional Siamese (apple-head) are named Thai cats..."

This is an example of one of her cats:

Above:As can be seen this is a traditional Siamese cat but called a Thai Cat in Russia and other countries that register their cats through the Word Cat Federation. This highlights the complications with the Thai cats. It would have been better if all cat associations and cat fancy people had stuck with "Traditional Siamese" to refer to old style Siamese cats. What am I talking about? It's actually all spelled out in a long article on Siamese cat history.

In summary, when the Siamese cat was imported from Siam (Thailand) in the late 1800s (1884) this cat, rare as it then was at that time, was simply a normal looking cat with a pointed coat. In fact, the face and body were quite rounded, not at all long or "foreign" in type ("foreign" in the cat fancy means slender and "type" means appearance and shape). In the mid 1900s the cat fancy (cat breeders) decided to "refine" the appearance.

This meant making the cat more delicate and elongated, rather peculiar looking in fact and not at all natural in appearance. A bit like an over done face lift. By the end of the 1900s and in to the 21st century the appearance of a once normal domestic cat had changed out of all recognition to a cat breed referred to as the Modern Siamese cat. The cat breed was still called the Siamese cat, however.

The traditional Siamese cat was side lined as the breed was the wrong shape to be shown at cat shows. The breed standard (the guidelines upon which the cat breeders breed cats of all breeds) had been adjusted to reflect the new appearance. A backlash occurred and eventually a major cat registry TICA (The International Cat Association) accepted back into the fold the old fashioned Siamese cat under a new name, the Thai. In the meantime, the appearance of this cat having been elongated, it became unclear how long the face should be.

What happened is that there is now a range of appearances from the contemporary (Modern ) through (via) the Classic to the Traditional (more rounded head and face). There is no definition of a Classic Siamese or a Traditional Siamese as far as I am aware (except for the new breed standard for Thai cats) but Thai cats are probably closest to the mid range Siamese cat or Classic Siamese cat. It is a great day for traditionalists. And it is apparent that things are changing as Helmi Flick, one of the worlds best cat photographers is now being asked to photograph Thai cats. Until recently she would rarely meet the traditional looking Siamese at cat shows for the above reasons.
Update 19th May 2009: As mentioned above Cristy Bird has provided some helpful information. She disagrees with parts of my description and makes these points.
The TICA website makes this further points about Thai cats: The Thai cat is the breed that is intended to represent the original cat from Siam as it then was. In Thailand the breed is called the Wichienmaat and elsewhere as the "Old-Style Siamese". TICA says that this cat breed closely resembles the 19th and early 20th century Siamese. Update 29th December 2009 Mary Alexander has contacted me. Here are some photographs of some kittens from her cattery Blue-Gem Siamese. This cattery is registered with the CFA, TICA and CFF and is in Massachusetts, USA. I can't add or improve Mary's comments about her kittens and the Thai cat generally so here they are:


I think it's important for people to see what a beautiful modified wedge Siamese should look like. These kittens...are sired by my Bacchus, who's grandfather was a recent import from Thailand. Bacchus grandsire was brought into this country by Dr. Cris Bird. She and a few others, like me, are working to preserve these genetic linage's, and promote a healthy well balanced Siamese cat. The kittens photo's are taken at 5 weeks old. All seal points, Thai. Or what some people also call a Classic style Siamese. 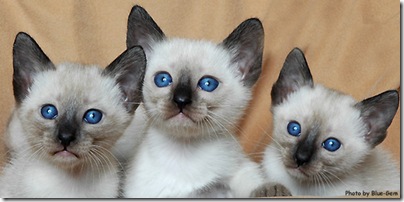 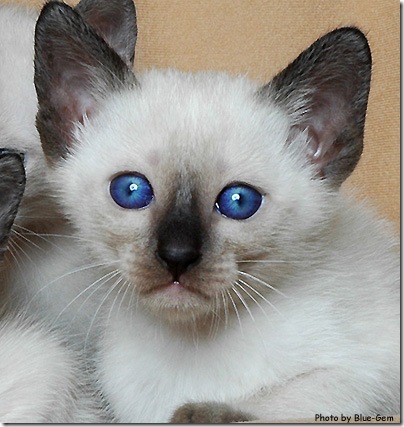 Photo above: copyright by Blue-Gem Mary...Thank you very much for sharing your experience and expertise with us. Update 26th January 2011 All the above relates to the USA market.  In the UK the Thai cat exists as a group that started as just the Korat. The Thai is two naturally appearing variations (despite what anyone may claim) in the Korat. They are the (a) Thai Lilac a lilac self cat with green eyes and (b) Thai Blue Point  Blue pointed cat
Both are of Korat Type and are recognized by the GCCF (UK cat show judge who has judged Thais). "To all intents and purposes, the Thais are simply Korats wearing a different coat"(Korat Cat Association). Thai cats - TICA Breed Standard Summary of interesting points The head and body of the Thai are both less narrow and rangy than the Modern Siamese. The Modern Siamese is "The" Siamese (or was the only Siamese with a breed standard) so it is nice to see how the standards compare. TICA says that the shape of the head should be a modified wedge.

This is classic breed standard speak for pretty much a normal cat head shape only the standard goes on to say that the head should be longer than wide but not in an extreme way. The reference to "extreme" is a reference in my opinion to the extremely narrow Modern Siamese cat head. As expected the description of the head shape is in so many words saying that it should be somewhere in between the Traditional and the Modern (my interpretation).

The acceptance of Thai cats by TICA (but not notably the CFA) is for me (this is my view only) a quiet admission that cat breeders got the breeding of the Siamese cat wrong and bred too far from the conventional Siamese appearance with resultant health and frankly appearance problems. People just found the Modern Siamese less attractive than the good old fashioned Siamese cat. Although TICA wouldn't agree to this assessment.

They have maintained recognition of the Modern Siamese (or what is referred to as the Siamese cat). The TICA "general description" section of the breed standard states that Thai cats should resemble the original indigenous pointed cats of Siam (now Thailand). In my view the original pointed cats of Siam were in fact more cobby and rounded than even the Thai so I am not sure that TICA have got this right. The Siamese cat history page on this website bears out what I say. TICA stress again in this section that this cat must not be extreme.

TICA reinforce this by saying that Thai cats are really a recognition of the breeders who stayed loyal to the traditional Siamese cat. As to the body it should be "slightly to moderately long". In other words more normal but not stocky or in any way cobby. This is well demonstrated in the photographs of Helmi Flick. As expected cross-eyed Thai cats will be disqualified in competition. This is a recognized defect (Siamese cat health problem) of the Siamese and can be found in the Himalayan too.