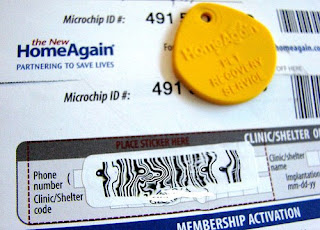 Microchipping for pets is a secure (but is it safe?) way of identifying the person who is responsible for the pet - and, from my point of view, the cat. The microchip in this instance is a glass encased implanted radio-frequency (RFID) microchip transponder (see picture below). It sends out a signal that is received outside the body of the cat by a device (a scanner) held by the veterinarian or other person. This produces a registration number from which data can be accessed. In the USA they are FDA authorized. But I guess that is not 100% conclusive as to their safety.

Domestic cats are still talked about as being "owned" by people. I prefer "living wi

th" or "kept" as it fosters are more equal and more healthy relationship, which leads to better cat care. The concept of ownership is promoted by the law which generally treats cats and pets "chattels", that is objects in the possession of people. This I believe should be changed.

Anyway another way to identify the cat's keeper is by the cat wearing a cat collar but this are potentially dangerous. Microchipping for pets is much safer for pets and cats, we are told, and this seems to be the case. But is it?

Some animal research has been done on mice apparently which indicates a 1%-10% incidence (see below for a slightly more accurate figure) of malignant cancers around the microchip. It is worth adding at this point that in the USA there is (or was) a scheme for microchipping humans as a more efficient means of accessing medical records when treatment was required. About 2,000 humans have the microchip. The plan is for many millions. This is a neat idea but there seems to be some controversy about it due to the possibility of malignant cancer being induced by the presence of the microchip.

There have been several reports on the the subject of tumor induced microchipping for pets (at least 11, it seems, over the period 1990-2006). The reports were reviewed by Katherine Albrecht in November 2007. The report is called, "Microchip-Induced Tumors in Laboratory Rodents and Dogs: A Review of the Literature 1990–2006".

In 6 of the 11 projects tumors developed around or close to the site of the implanted microchip in between 0.8% and 10.2% percent of the tested animals. It is thought that the presence of the microchip has a negative impact on the genetic make up of the cells near the microchip. If this is the case the mircochip would be a genotoxic object. A genotoxic substance is one that can cause damage to DNA material. This research is against microchipping for pets.

These tests would appear to have been carried out for the protection of humans in relation to the scheme to microchip people mentioned above. Clearly the research is of interest to cat and pet keepers as well. It would seem though that the jury is out on whether microchipping for pets has an overall benefit.

If cancer research is supported by live case studies over a period of time this will obviously mean a rethink. As millions of cats and dogs have been microchipped with, as far as I can see, no significant reports of cancer it would seem fair to say that microchipping for pets is beneficial overall in that the benefits outweigh the possible detriments.

However, one of the issues always present with consumer objects is that it can be hard to get to the truth as big business tends to muddy the water of any attempts to find the true facts if those facts are against profit.

Microchips can migrate from the back of the neck where they are implanted to the shoulders and sides. The cost of implantation may include lifelong registration (usually does). Petlog a branch of the Kennel Club run a registration service in the UK. If you move you'll need to update the database. This may incur a small charge.

---indications are that the benefits outweigh the possible health issues of microchipping for pets but the jury is still out.
---common sense dictates that if your cat is like mine, a cat that rarely goes further than 15 yards from the patio door, is old and a moggie there is no need realistically to consider microchipping. The same would apply to full-time indoor cats.
---routine inspections (by touch) around area of the implanted microchip and surrounding areas would it seem be advisable.
---on a visit to the veterinarian's surgery it would be sensible to have the microchip scanned to see if it has moved, to see that it still works and also for the vet to check for cancer.