Feeding stray cats is one of those "things". It is the reaction of a concerned and gentle person for vulnerable fellow creatures that have been left in that state by other human beings who are not so nice nor so concerned. Some who abandon their cats and don't spay or neuter them are downright bad and irresponsible.

The only way to treat stray cats is to neuter them and release them and, yes, maybe then feed them. So, strictly speaking feeding stray cats is not that clever because you support an unsupportable situation really. There are too many stray cats. To feed them simply perpetuates the problem. But what are we to do? Leave them to die, to starve. That is impossible for some people. The problem needs to dealt with at its root; the irresponsible people who acquire a domestic cat and then abandon her/him. All feral cats were once domestic cats. And all domestic cats once lived with someone as this is the definition of a domestic cat.

I am feeding stray cats or actually I am feeding a stray cat. But I did feed and care for a stray cat (an abandoned cat) some 16 years ago. She is still with me. The new stray cat I am feeding is a youngish boy cat, who I have called Timmy (picture above). He is here sometimes and sometimes he is not. He comes and goes. He is always hungry when he is here. He is appreciative. These days he is staying a bit longer than before. I do it because he is a stray cat and needs help. There is really no other reason.


He is very skinny and very athletic. When he has eaten he sleeps first for several hours. He eats a massive amount, more than the person that I am living with. After he has had a rest (see above top of the page), he leaves. He walks to the bottom of the garden and them jumps a high 7 foot brick wall. He jumps about 6 feet and almost climbs the last foot. It is all so effortless for him. He is very flexible and long legged with a long body. This helps to make him more athletic. He is a tuxedo cat as is my girl cat (mentioned earlier in this post).

This is the point of this post. I have been feeding him for about 5 months. My girlfriend complains about the amount of cat food (and cost) that he gets through. Today for the first time he played. Until then he was defensive and wary. He would flinch when approached and would look scared if you raised your hand in the wrong way.

We have a new addition to the household and it is not of my choosing. This is another stray cat. I call her Pippa: 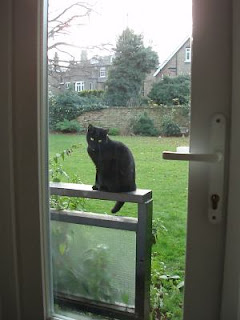 She actually lives in a big house next door with, who I have presumed is, a divorced woman. The house must be worth about £3 million (GPD), even now with the down turn in property prices. There is a big garden yet this cat comes to me for food. (The woman could have built a fine enclosure).

The owner says that this cat is a good hunter. This means, I suppose, that she gets her food through hunting as it seems the owner doesn't feed her!

What can one do? I can't turn her away. And that is the classic cry from people who care about animals. She comes in the cat flap at night and nervously nibbles some cat food and then clears off.

She has become more friendly and yesterday she climbed on my lap. She adores being stroked and head butts like I have never been head butted before. I sense that she lacks affection from her owner. The owner also lets this girl cat wander all over the busy road outside. I confronted the neighbor about this and of course achieved nothing. That was predicable. People will not be criticized these days no matter how nicely one does it. On one occasion I had to hold up traffic in both directions to ensure that Pippa got over the road safely. One day she'll get hit I suspect and it will upset me badly as I can see the road from my kitchen window.

(Further Update: about 9 months ago from today's date, 10th April 2011, Pippa was killed on the road. The "owner" was in a car that was one behind the car that killed her and saw the whole thing. I am sure she felt nothing as she was and is an appallingly bad cat caretaker. So sad. So pointless and sick. I hate irresponsible people.)

I am tired of feeding Timmy - read about it, please.