The cat - photo by OwenX - licensed use under Wikimedia commons

The Cat of nine tails or Cat-o'-nine-tails is a device which tells us how brutal the world was in the 1700s and 1800s both in relation to humans and animals including of course the domestic cat.

We know the Cat of nine tails or "the cat" was and still is a whip with 9 strands (or thongs) used to inflict corporal punishment on miscreants (a wrong doer). It is still used in some of the British Empire's former colonies. One such place is Trinidad and Tobago, where it is used (and 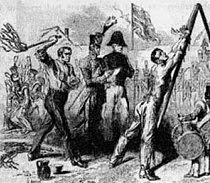 the birch) to punish criminal offenders prosecuted under the Corporal Punishment (Offenders over Sixteen) Act 1953 (src: Wikipedia). The cat in Trinidad and Tobago is made up of knotted cotton designed to cause a lot of pain.

It was first used in the British Navy. The armed forces of the then British Empire were well disciplined and this device helped to maintain discipline. Wellington (British Army) considered flogging essential to keep discipline as many privates were blaggards (the equivalent of louts today).

I had thought that the reason for the 9 strands was a direct reference to a cat's nine lives but it seems to have a religious context being 3 times 3 making a trinity (meaning 3) of trinities. The religious context presumably signifying the good of the punishment as a result of the bad behavior. 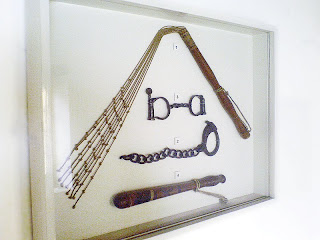 To read more on this please go here: Google Books

The term, "a cat has nine lives" originates from the trinity of trinities which in making the number 9 (3 X 3) was considered a lucky number. As the cat was resourceful she/he was considered lucky and said to have nine lives. So there is an indirect connection between these 2 phrases.

Formal punishment in the Royal Navy in the 18th and 19th centuries was given on deck in front of the crew as a deterrent. It was also impractical to do it below deck due to cramped conditions. Hence the term "there is no room to swing a cat". The word "cat" in this phase being a reference to the cat of nine tails not an actual cat. However, this term may have originated earlier and in much crueler circumstances for the domestic cat.

William Shakespeare lived (1564-1616) in his play Much Ado About Nothing, writes: "Hang me in a bottle like a cat, and shoot at me." This is a reference to putting a cat in a bag and hanging the bag (leather bottle) from a tree for archers to fire at as practice. I suppose the cat would wriggle and move the bag making it harder to hit. This demonstrates the unthinking treatment of the domestic cat in those times. Many parts of the world still have that kind of relationship with the domestic cat. I sometimes believe that the domestic cat would have been better off remaining wild rather than becoming domesticated about 10,000 years ago.

The reason why the cat of nine tails was named is because it left marks on the back that resembled the scratches of a domestic cat who has attacked an animal or human.

Photo 2nd down - this image is considered copyright free due to effluxion of time (please correct me if I am wrong). It shows a soldier (not a sailor) being flogged by a cat of nine tails.