Ragdoll Cat Behavior is said to be so particular and unusual, they named the cat after it. But is the behavior really as stated? Or is there a bit of poetic license involved to promote and define this well liked cat breed?

I don't want to break the myths and stories surrounding this cat breed but in the interests of fair play and honesty, this cat is in my opinion like many other cats, both purebred and Moggie, in terms of temperament.

Sure, Ragdoll Cat behavior may be more lad back than some other breeds such as the Modern Siamese (more vocal and 'intelligent') or the wildcat hybrids such as the Chausie and Bengal, which are more active but this doesn't mean the Ragdoll doesn't behave like a typical domestic cat. This includes all the usual likes and dislikes such as play, company and attention from us.

The CFA describes this cat breed as "floor cats" and not jumpers. This, I can understand as my Moggie is exactly that. My previous cat was half NFC (Norwegian Forest Cat) and was a great jumper. What I am saying is that a moggie can be as docile as a Ragdoll and many are. The docile nature of this cat breed is not unique to the Ragdoll cat. 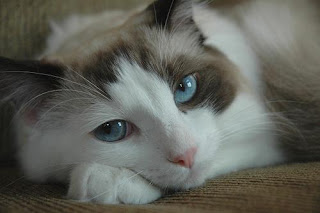 I would think it fair to say that on average, all other influences being equal (such as the cat's upbringing and whether she is well socialized), Ragdoll Cat behavior is probably more laid back than most other breeds.

They are quite large cats too so you get the combination of size and even temperament, which is an attractive combination to some people.

The idea that it is unusual that this cat goes limp when you pick her up is, you know, a bit of an exaggeration. A lot of cats in the right mood go soft and limp when picked up. It is probably a reflection of the classic response of a kitten being picked up by the scruff of the neck by the mother. The kitten will automatically go limp and not struggle to allow the mother to carry the kitten to safety.

As people who keep cats are seen as 'parent cats' by the cat and as the keeping of domestic cats keeps the cat, psychologically, as a kitten, the response to being picked up will be as described.

One final point, there are many influences that affect cat behavior and the variation in behavior from cat to cat is probably greater than the variation in behavior between cat breeds and superimposed into that is how well the cat has been raised by the cat breeder. Ragdoll cats are purebred cats so it is almost certain that the life of a Ragdoll started in a cat breeder's cattery - how good was the cattery? I have posted an article called "cat behavior explained".