The Gir Forest is home to the last species of the Asiatic lion in the world numbering only about 400 approx. It is situated in the north-west of India (see map). 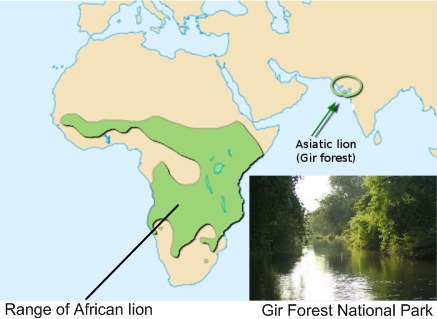 We visited the "Gir National Park" on 5 different occasions on 3 different days, lucky to spot the rare elusive lion. On the last day we saw an entire pride of 6 lions, sitting across our jeep trek road, approx 50 meters away from us. It was a life scene straight out of a "National Geographic Documentary".

What baffled and surprised me was the behaviour of these totally wild lions towards the Guards (Wild-Life rangers) of the park. When a lion was spotted in the forest undergrowth by a guard  the tourist jeeps were allowed to approach closer to the lion for photography and viewing. We spotted a lion on all 3 different days of a 3 hour safari ride inside the jungle and every time a forest ranger kept watch on the tourists and the lion.

These guards were familiar to the lions akin to our house-hold cats, hence allowed the guards to approach them on foot and a ordinary wooden baton within a 50 meters distance.

Remember, these are genuine wild forest lions that prey on other jungle species for survival including the nomadic Maldhari's tribal cattle. Yet these same lions have never ever attacked a forest ranger, very strange and also demonstrates that all wild species are basically scared of humans.

On the last day we spotted a pride of 6 lions  relaxing on a mound, later walking in a file alongside the tourist road. The pride was led by a matriarch lioness and there were 3 cubs, a juvenile male lion and another mature lioness.

They resembled a mother cat with her kittens, reminding me of my own cats back home in Mumbai. For the first time in my life I got to observe natural wild lions and realized that our small house-hold cats mimic the behaviour of the "Big Cats".

Read my blog " The Last Asiatic Lion in Gir Forest":-