Today's date: May 19, 2012. This is a comparison between a Manx show cat from about 1900 in England (exact date is, I believe, 1898) and a modern Manx photographed in the United States by the celebrated photographer Helmi Flick. Her photograph was probably taken at a cat show and the cat is therefore also a show cat. The cat of 113 years ago is a classic tabby and the modern Manx is a tabby and white. What separates them is selective breeding based on evolving ideas as to what a Manx cat should look like. 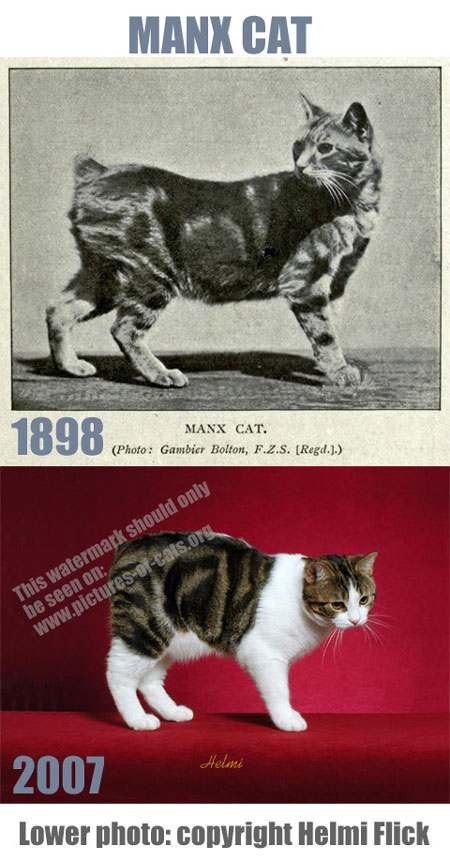 On the basis that both cats are good representations of the breed at the time (which I believe is the case), the Manx cat has been developed to be shorter in length and more cobby. Also the modern Manx leans forward more indicating the preference for hind legs that are longer than shortened forelimbs.  The head looks a bit more rounded as well. The 1898 cat is essentially a normal random bred cat without a tail in terms of overall shape while the 2007 cat is a refined and selectively bred Manx along the lines of what it is believed the Manx should look like but exaggerated somewhat. The general modus operandi is to breed slightly extreme and in some cases very extreme (e.g. contemporary Persian) to make the breed more outstanding and interesting while differentiating it from other breeds.

Jennings, a UK show cat judge of 1901, says1 that "In shape and size the Manx resembles the ordinary short-haired cat, and may be of any colour and markings, the absence of tail giving the appearance of greater length of limb." Mr Jennings hints that some Manx cats with stumps of tails are ordinary cats with docked tails.

The CFA breed standard for the Manx makes it clear that this cat should be short in length ("short back") and round. The forelimbs should be short and "hind legs much longer than forelegs...".

There you have it. A classic example of how a breed develops over 100 years or so. You can make up your own mind if all that effort resulted in a better cat.