In general cats and horses get along fine and are often close friends. You'll see quite a lot of photographs on the internet that indicate a close friendship between cat and horse. Perhaps the most famous horse to befriend a cat was the Godolphin Arabian, one of three stallions that are the founders of today's thoroughbred horse racing bloodstock. The famous Godolphin Stables are named after the horse. Godolphin is perhaps the most famous racehorse of all time.

Godolphin befriended a cat. They became very close friends. The Godolphin Arabian died in 1753 aged 29. His best friend, the black cat, Grimalkin, sat on the horse's dead body until it was buried within the stable block at Wandlebury.

Immediately this famous stallion was buried Grimalkin reluctantly walked away and was not seen again until after her dead body was discovered in a hay loft. She probably never got over the loss of her best friend.

The famous English artist and painter of horses George Stubbs (1724-1806) painted the Godolphin Arabian with his cat companion:

In the painting the cat does not look particularly black but it may be that Stubbs painted the cat with reflections from the black fur. It looks like that.

A major reason why cats and horses have formed such strong bonds is because in the past cats lived in horse's stables. I am sure this still happens.

Another famous racehorse called "Foxhall" made close friends with two kittens, one a tabby and the other white. They lived in Foxhall's box. After the horses attendant whose name was Hatcher, had rubbed down his horse, he would place the kittens on the Foxhall's back where they would curl up and settle down. 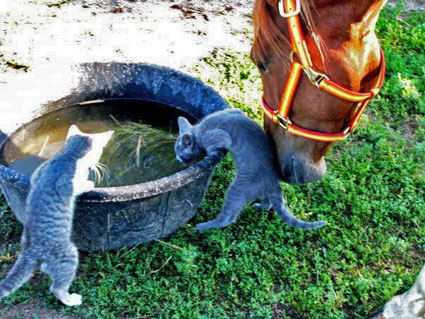 In the King's stables in Windsor there was a cat who was accustomed to jumping onto and staying on his horse's back. The horse was happy with the arrangement and in order to not disturb his cat companion would fall asleep standing up.
Email Post
Labels: Cat behavior horses