- May 13, 2012
At one time around 1900, the Turkish Angora was similar to the Persian. Looking at photographs of the two cats today (2012) you would not believe it. Selective breeding has separated them completely. The Turkish Angora is quite long and slender (foreign in shape) while the Persian has been developed in the opposite direction, round and cobby.

The Angora as it was called in 1901 (as opposed to "Turkish Angora") differed from the Persian in its coat, head, ears and tail but not in overall conformation (body type). The fur of the Angora was glossier and softer than the fur of the Persian. Angora fur was longer in clusters and it nearly touched the ground. The desired color was white. 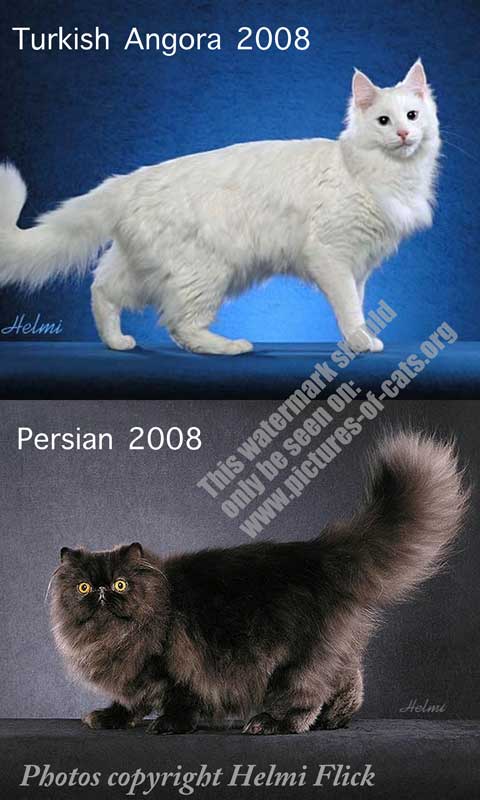 The Angora's fur was a desirable commercial product in Turkey and sold to surrounding countries. I am not sure about this. I presume that we are talking about the pelt of the cat in which case they were obviously killed. This seems to be in conflict with this cat being a show cat in the early cat fancy. However, I may have this wrong.

The head of the Angora was less round and more angular than the Persian cat's head. It appears that the ears of the Angora were well tufted, more so than those of the Persian. The advice for breeding the Angora at the time was to cross the cat with imports from Angora (Turkey) thereby ensuring that the cat was purebred. That is an interesting concept today. It is common sense but you would rarely, I think, hear a breeder doing that today. Angora cats in Turkey are probably more purebred than the purebred Turkish Angora bred by breeders in the West.