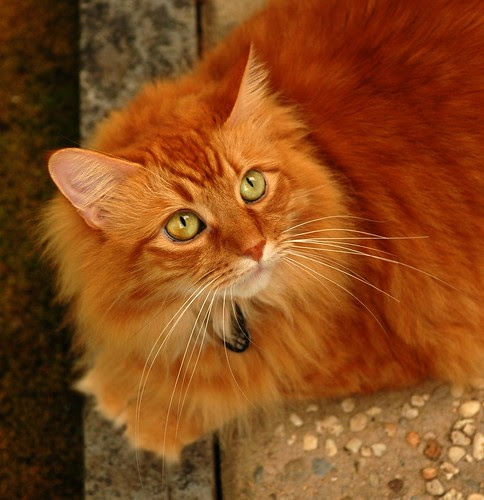 CATILLACK, a photo by David McCudden on Flickr.
Photo is copyright David McCudden
This is a truly beautiful orange cat. I think she is the most beautiful cat I have seen bar one or two others and I have seen a large number of cats as you might expect. Actually she is orange and white. She is a tabby cat. You can see the classic "M" mark on the forehead. Even the mark is beautiful. And she looks very female, sexy almost. Uhmm I have not heard someone call a cat "sexy" before but I have now!

If she was a person she would be walking down a red carpet at the Cannes Film Festival. She would be a film star. Her name is Catillack and she is a Maine Coon cat....err..no, wrong, she looks like a Maine Coon (except for the lack of ear tufts and long ear hair) and looks classy enough to be purebred Maine Coon but is, in fact, a moggie born in a shed I am told. She is definitely the most beautiful moggie I have seen. The photograph is by her human companion, David McCudden. Who takes  a bloody good photograph by the way.

The gene that makes her orange is sex-linked. More sex...The gene is carried on one of the sex chromosomes. The symbol for the gene is O. This gene removes "all the eumelanin pigment from the hair fibres.." Eumelanin produces black, blue and chocolate colours etc.. An alternate pigment is produced called "phaeomelanin".  The pigment granule is lighter and it reflects light differently.

I have quoted Robinsons' Genetics (briefly) and the book says that the tortoiseshell cat is "the heterozygous female" (Oo).

Some people call orange cats "yellow cats". Why not! Yellow tabby cats are one of my favorites.  Martha Kane in Malta cares for an orange tabby amongst the many more she rescues and she says they are more likely to be the boss in a group but in a benevolent way. The orange traditional Persian is also very handsome.

The orange cat varies in the colour/density of the orange. I must say that CATILLACK is the most beautifully deep orange I have seen on a cat. Maybe it is David's photography and the low evening light that enhances the orange and gives it that deep luster. I don't care, she's a very sexy cat.
By Michael Broad at June 19, 2011