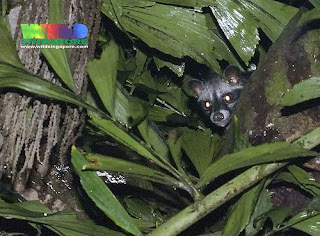 The enclosures are carefully constructed to simulate the natural environment as near as possible and food is hidden so the animals search as in the wild.

The lighting is bright enough to allow visitors to see wild cats at night (and the other nocturnal animals) yet subdued enough to appear as dusk or dawn to the cats.

Wild (encroaching on the zoo grounds) or captive cats can seen including the Asian Leopard cat (the wild half of the foundation Bengal cats), civet cats and the flat headed cat. The Leopard cat apparently breeds well at the zoo and there are a dozen of them.

I am sad that zoos are needed in a world becoming gradually devoid of many wild animals such as the Bengal tiger and cheetah but if it must be this way, it is good to see an enlightened approach to keeping captive animals.

See wild cats at night - Photo published under a creative commons license = Attribution-NonCommercial-NoDerivs License. This cat is not one from the Taiping Zoo.
Email Post
Labels: Wild cats