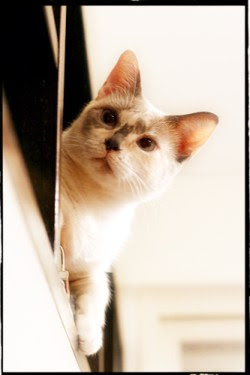 A healthy cat - photo by fofurasfelinas

Feline Pancreatitis is an inflammation of the pancreas causing it to malfunction. The inflammation causes leakage of the digestive juices produced in the pancreas. It is a serious disease and can be life threatening. Feline pancreatitis is rare in both acute (a sudden, bad episode) and chronic (long term, more common in cats) forms. The pancreas is one of the cat's endocrine glands which produce hormones. An example of another is the pituitary gland. It is a small gland close to the stomach and lower intestine.

Insulin produced in the pancreas is secreted directly into the blood circulation and transported throughout the body. Its purpose is to enable sugars in the digested food to enter the individual cells of the cat's body. Sugars are a form of energy for the cat when metabolized. In other words insulin helps the cat to utilize the sugars (and other nutrients, amino acids) in the food eaten.

Knowing what the pancreas does tells us what happens when it is not functioning properly. If there is an insufficient supply of digestive enzymes the food is insufficiently digested and it is therefore not absorbed into the body adequately. In other words the cat is eating but not getting the full benefit of the food eaten.

This results in what veterinarians call "malabsorption syndrome". The word "syndrome" indicating a range of consequences or symptoms that result from not digesting the food properly. The symptoms are:

{note: these symptoms may also be present in other illnesses such as gastroenteritis - irritated stomach or intestine, live or kidney disease. This means that it is difficult to diagnose feline pancreatitis}

The most common symptom for feline pancreatitis may be as a result of a deficiency in the production of insulin. This causes diabetes mellitus (sugar diabetes). Sugar diabetes is a common disease in cats. It is on the increase. It is claimed by Dr Hodgkins a veterinarian in her book, "Your Cat", that a major factor in the increase of feline diabetes is the change in cats' diet to an increase in dry cat food which contains raised carbohydrate levels as the introduction of carbohydrates is needed in the manufacture of the food (see cat food recipe)

In other words the diabetes is not caused by a reduction in insulin but an increase in the intake of sugars forming excess sugars in the blood.

As mentioned above insulin helps the cat use sugars effectively. If sugars are not being used properly the result is higher blood sugar levels (called hypoglycemia). This excess sugar is excreted in urine. Increased urination results in increased drinking of water to compensate a symptom of sugar diabetes.

These are generally unknown or the experts are still unsure. In humans there are a range of causes such as alcoholism (ethanol), drugs, trauma, mumps, gallstones, steroids, malfunction of the autoimmune system and Hyperlipidaemia. The last one means a high fat content in the blood. This may be a underlying cause in cats or a potential risk factor (http://vetmedicine.about.com). This indicates that a diet high in fat may be a contributing factor.

Other possible causes are:

---as for humans, drugs may contribute or cause feline pancreatitis
---toxins (poisons that may exist in the area such as insecticides or contaminated water)
---viruses
---bacterial infections
---an underlying disease
---being overweight may contribute

This is not targeted but "supportive". This means the cat cures herself while we help that process through supportive actions including a suitable diet - obviously a case for seeing the veterinarian.....


Feline Pancreatitis- Sources:
Photo: The cat is called Lua, the first cat (techically) of fofurasfelinas. She is a healthy cat and a feminine cat.

Anonymous said…
Dr Hodgkin's is her name (you have spelled it incorrectly). Also if you get a copy of her book YOUR CAT: Simple New Secrets to a Longer Stronger Life she has even more info on all the illnesses caused by dry food.

Michael Broad said…
Hi, thanks for the comment. Sorry about the misspelling. I have corrected it.
21 August 2008 at 11:26

Michael Broad said…
Hi I can't resist this. You have spelled it incorrectly too. You have put an apostrophe in the name when it shouldn't be there!
21 August 2008 at 11:30

Anonymous said…
This comment has been removed by a blog administrator.
11 August 2010 at 13:58